Construct a simple 35 mm film pinhole camera from a small matchbox, a roll of film, and an empty film canister. The matchbox camera produces an interesting wide-angle image due to the extremely short focal length while the convenience of 35 mm film makes this small camera fun and practical to use. 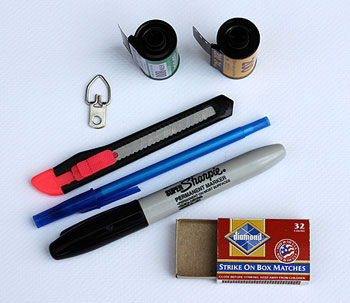 All of the supplies for this workshop are common household items. The only items that you may need to acquire are the empty film canister and the D-ring.

Chapter 2 of the book The Pinhole Camera outlines the basic tools needed for pinhole creation. Gather the following additional supplies for this workshop:

Separate the matchbox cover and tray. Locate the center of your cover and cut a small 1/4″ hole in middle with your blade. Next, construct a simple pinhole. Mount your pinhole plate, over the cut out section on the cover of your matchbox. You can use black tape to hold the pinhole plate in position. After your pinhole is in place, wrap the matchbox cover in black tape. This will prevent light from penetrating the thin cardboard. Lastly, create a black tape shutter and place it over the pinhole. Set the cover aside and work on the tray. 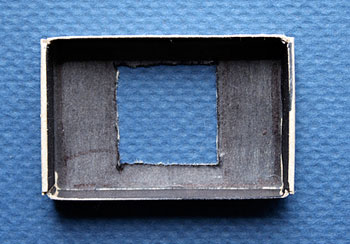 It is better to understand the purpose of the matchbox tray before proceeding. The film will be held in position as it passes between your tray and the cover. A portion of the matchbox tray is removed, creating a mask for the 35 mm film. Only the portion of film that passes behind the mask will be exposed in your camera. Plan your mask and use the cutting blade to create an opening in the tray that will serve as the image mask. The ragged edges created by your blade will add interest to your images. If you want a more finished mask, line all openings with some tape to create clean, straight edges. When your mask is finished, cover the interior areas with black marker to reduce reflected light.

If you have an uneven edge to your mask, any imperfections will be recorded on the film. This can be used as a creative approach to your image-making.

To load your camera, find a fresh roll of film and one empty canister. Empty 35 mm spools are available at one-hour labs. 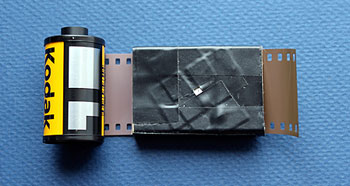 Take your fresh roll of film and pull out a small section of leader film, approximately 2″ in length, from the canister. Cut the curved leader off, leaving a nice straight edge to your film. Feed your film through the left side of the matchbox cover. Pull the film through until it comes out on the opposite side of your matchbox. 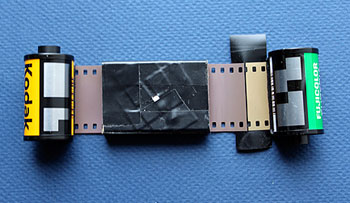 Cut a piece of black tape approximately 2″ in length. Locate your take-up canister and align it on the right side of your matchbox camera. The receiving spool should be pointed downwards on this side; when it meets the trimmed fresh film, splice the two pieces of film together with the black tape and ensure that they are secure to one another.

Wedge your matchbox tray inside the camera. It should be firm and snug within the camera, but not impossible to move. The film stock should run underneath the mask. Insert your D-ring into the bottom of the take up spool. Gently turn the D-ring clockwise to pull the film through the matchbox.

You should be able to feel the tension as the film is pulled under the cardboard mask.

Determine the number of D-ring rotations that your camera requires to advance the film for each frame. The easiest method is to draw a line with your pen directly on the film base at the left edge of your matchbox. Turn the D-ring until your pen mark line advances to the right side of the matchbox, noting the number of rotations. Tape all the seams and joints where the film canisters meet the edge of the matchbox. This will reduce the light leaks that are notorious with this type of camera.

Do not underestimate the value of a unique point of view! Matchbox cameras offer flexibility, allowing for experimentation with perspective.

The matchbox camera is portable and fun to use. Try a variety of lighting conditions and film speeds. There are many variables to using 35 mm film such as color balance, film speed, and reciprocity factor. Use slow speed film such as ISO 100 if you are photographing outdoors. Remember, the short focal length will result in brief exposure times.

Take the following suggestions as an estimation for your own exposure on ISO 100 film:

Follow this process to make an exposure: remove the shutter from the pinhole, allow the proper exposure time, and replace the shutter. Advance your film to the next frame by rotating your D-ring. This is a trial and error process and it often takes several attempts to find the right exposure time for your camera. Record a few notes on your subject, lighting conditions, and exposure time to help you improve for the next roll. For additional exposure tips and techniques, consult the Advanced Track of Chapter 4 of The Pinhole Camera.

As you photograph and advance your film, there will be a noticeable amount of tension within the take-up film canister. When you reach the end of your roll, there will be a tension on the film and you will not be able to advance the film any further. Remove your D-ring from the take-up canister and insert it into the bottom of the supply canister. Turn the D-ring, retracting the film back into the original supply canister. When the film is fully rewound into the supply canister, you will notice the same tension on the film. It is now safe to unwrap your matchbox, removing the spliced film from the take-up spool. Finally, process your roll of film at any one-hour photo lab.

Brian J. Krummel, a photographer by formal training, completed a BA in Arts from Pennsylvania State University in 1996, focusing on photography as a creative discipline. Brian’s passion about photography has led him to continue his own photographic experimentations and explorations over the years with a variety of tools and techniques, which most recently included branching off into the interests of lo-fi, toy camera, and pinhole photography.
Brian has gained media exposure through television, newspapers, and websites for his on-going work that has been exhibited and published in photography magazines. He also teaches workshops where emerging artists can learn the hands-on basics of pinhole photography.
Like most artists, Brian enjoys a parallel creative career as a computer programmer and owns his own interactive firm. Brian works in the Pittsburgh, PA area and lives with his wife and three children in a quiet city suburb. Brian Krummel can be reached online at www.thepinholecamera.com.
The 210 page book is perfect bound, 8″ x 10″, and in full color with over 300 photographs and illustrations.

The benefits of pinholing, making cameras, material and darkroom skills.