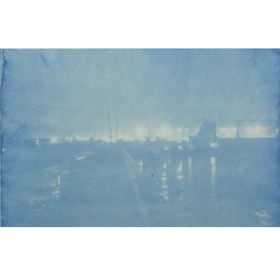 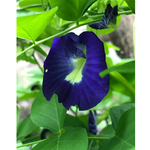 Challenges or observations:
Sun showers, a common phenomenon in the equator. in which prevented me to expose the print. During this year’s summer, we experienced more sun showers than before. It definitely must be a sunprint, I have no UV box. It was a waste of time to try it in the box, inside and all. The more layers you add, a hint of purplish chrome appears, though it vanished after exposure. Telang also could change colour to purple by adding acid such as a dash of squeezed lime. Telang is known as a natural colorant for foods and beverages in Indonesia.

I took the photo during a film shoot of Misti, a social awareness campaign by a Jakarta-based Foundation to prevent child marriage, especially for Indonesian female teens. The theme “Hope” is parallel to the film’s theme and furthermore, the beatific horizon of the North coast of Jakarta symbolizing a hope despite the actual setting of low-income-cum-slum area.
Though I took the picture in 2019, I made the Anthotype print in May-June 2022, marking the potential end of “pandemic” in my country.