These are some of the ‘forgotten’ processes. By that we mean that no one is working and producing new images in this process – at least we haven’t found anyone. But we would be very happy to be proven wrong!

If you are an artist working in these processes, or an historian itching to tell us more about one of these, or about one not listed here, please email us.

We are very interested in more information about this – titbits or thesises, anything you want to share!

William Mortensen’s abrasion tone has much in common with other forgotten processes in that the materials needed are no longer as common as they once were, especially projection papers such as the former Eastman Kodak Projection Proof. This had a surface that accepted razor blade etching, pencil work and pumice work. It was also great for oils, I worked out a simple version of mediobrome that I was pleased with.

Starting in the 1850s, as an alternative term for collodion direct positives (ambrotypes). Suggested to Herschel by Talbot, instead of Herschel’s initial Celanotype, or Allotype.

Invented by Sir John Herschel, like many other processes. Iron salts (ferric citrate) are used to precipitate silver under the influence of UV-light. The print is developed in silver nitrate. This process was later modified to become what is now the more known Kallitype and Vandyke process.

The Atrephograph was invented by James M. Letts.

1904 in France. Auguste and Louis Luminere inveted the Autochrome process. A glass plate was dusted with microscopic grains of potato startch that had been dyed red-orange, green and blue-violet. Any spaces were then filled in with a powder of black carbon. A panchromatic emulsion was then applied to the plate. The plate then exposed and developed, exposed, developed, exposed and re-developed again, forming a postitive transparency. In the 30s more sophisticated film became available and the Autochrome process died out.

Introduced in 1841 by Fox Talbot and used for about 10 years after. A weak salt solution was used, the paper dried, then brushed with a weak silver nitrate solution. This made a silver chloride on the paper and was light-sensitive. The final image was fixed using a salt solution called potassium iodide of hypo.

This process used hydrochloric acid, syrup of ioduret of iron, iodine and nitrate of silver.

Binh Dahns photosynthesis process. Binh says:
One summer, I was motivated to experiment with photosynthesis and its pigments after watching the lawn change color due to a water hose that was placed on it. Soon after that observation, I was making chlorophyll prints. Photosynthesis takes place in plants as carbon dioxide, water, and light energy is converted to sugars and oxygen. Photosynthesis is the main route by which free energy in the environment is made available to the living world. In my work, photosynthesis is used to record images onto leaves. The leaves are then cast in resin, like biological samples for scientific studies. The images were made into negatives. Then exposed onto living leaves, by placing the negatives onto the leaf, and placing that into a contact printing frame. The image formation was all due to chlorophyll, light, carbon dioxide, and water: the life source of plants and, consequently the Earth. This process deals with the idea of elemental transmigration: the decomposition and composition of matter into other forms.

Coat paper with a sulphate of copper and bichromate of potash solution and expse it to sunshine, then apply a solution of silver nitrate.

Terry King and Michael Maunder have done some experiments with Cyanotypes, going back to it’s source. Reading the original paper Writer / Sir John Herschel in 1842 – available at the Royal Society in London – lead to a “retro-invention” of the cyanotype process. King calls this invention “Cyanotype Rex” and Maunder’s take on the process is called “Herschelotype”. According to an article in View Camera, November 2005, the Cyanotype Rex has much shorter exposure times than the other recipes and tones well.

Originally called Energiatype. The process uses proto-sulphate of iron as a reducing agent. Same as Tintype.

Paper is washed with bromide of potassium and with fluate of soda.

A variation on Cyanotype Rex by Michael Maunder.

A picture produced by superposing a very light print, rendered translucent by varnish, and tinted upon the back, upon a stronger print, so as to give the effect of a photograph in natural colors.

Kwik-Print was a late-’70s technique involving coating a plastic
receptor sheet with light-sensitive dyes. You washed off the unexposed areas and could re-coat the sheet with another color. Bea Nettles was its most renowned practitioner and she has published Breaking the Rules: A Photo Media Cookbook. Tom says: “I’m sure Kwik-Print is long gone but I had fun with it”. 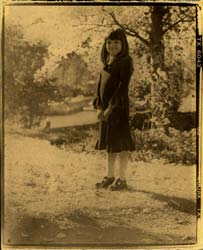 Traditionally called orotones, goldtones, or Curt-tones, the images would have been made by printing a positive image onto a sheet of glass coated with a photosensitive emulsion. The image on the glass was then backed with a mixture of banana oils and gold bronzing powder.
23.5K gold powder is what I’ve added in exchange of the bronzing powder. The process of coating glass sheets with photographic emulsion, printing and processing the image and coating it with gold, is all done by hand.
Edward Curtis, photographer of the American Indians and one who perfected the orotone (he called them Curt-Tones), is quoted as saying this of the process:
“The Ordinary Photographic print, however good, lacks depth and transparency, or more strictly speaking, Translucency. We all know how beautiful are the stones and pebbles in the limpid brook of the forest. Where the water absorbs the blue of the sky and the green of the foliage, yet when we take the same iridescent pebbles from the water and dry them they are dull and lifeless, so it is with the ordinary photographic print, but in the Curt-Tones (orotone) all the transparency is retained and they are full of life and sparkle as an opal.”

Pannotypes are large format tintypes exposed on tissue or wood, often handcolored. An old “folk-art tradition”, especially in the USA.

From Harry L Burnett Jr:
I have been working with photoceramics since mid 1950s. My first efforts were with toned wet collodion positives. Later I worked with light-sensitive diazo compounds for a while. After retirement, I began to work with the dichromate dust-on process. This was productive and very informative. Images could be produced that held exqusite detail and were probably as permanent as any continous tone print process ever discovered, very time consuming and difficult to achieve consistant results. About 2-3 years ago I began an odyssey with digital printing hoping to make film positives that would give me better control of the dust-on process. I mixed digital inks that were useful and it evolved into a simple useful photoceramic process.

I am now able to digitally fuse metallic oxide images onto ceramic substraits at 1250 degrees F. with a resolution of 2880×720 spots per inch in monochrome colors.

Captain Giuseppe Pizzighelli’s (1849-1912) Pizzitype paper (similar to Ziatype) was manufactured a short time and a commercial success until technical problems stopped the production.

Mongo Ponton (1801-1880), Scottish inventor. 1839 discovered that postassium bichromate was sensitive to light. He called his discovery Pontontype. A handome print that unfortunately faded with few months. But, this discovery was the beginning of gum bichromates! Thank you Ponton!

G.E.H. Rawlins invented in 1904 a process by which a layer of bichromated gelatine was exposed to light under a negative.
The tanning of the gelatine is in direct proportion to the transparency of the negative. Shadow areas are strongly tanned, mid-tones less so and highlights are not tanned at all.

After development it is washed to produce an image with a very subtle relief. Using oily pigments, either in monochrome or colour, the original image is then restored by hand. The ink is absorbed by the tanned part of the image but is repelled by the water held in the soft, untanned areas.

This inking process with a brush is the adaptation of Rawlins at this process.

Philippe has also written a book on the process Le Procédé Rawlins à l’Huile, in french. More details of this book can be found on Philippe’s website.

The Rawlins process is the same as the oilprint process.

Sphereotypes is a process patented (US patent #14,696 I believe) by Albert Bisbee in 1856. It was essentially a positive collodion image on glass that was exposed through a spherical mask – hence the name sphereotype – which was the same size as the mount that was to enclose it or case it was to be put into.

WB Woodbury (1834-85) invented this process, claiming it would not fade. Successfully. The do not fade, because the images do not rely on light-sensitive materials, but are made up of a stable pigment suspended in gelatine.