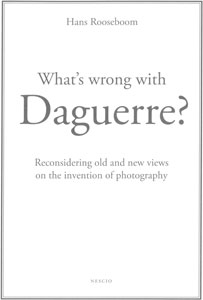 Why buy it here?
When you choose the option to buy directly from the author, the book is shipped by the author ensuring most of the money goes to the author. When buying from Amazon the author will get a small percentage – but also a good option!
The book usually arrives in 2-4 weeks.

Following the introduction of the daguerreotype process in 1839, Louis-Jacques-Mandé Daguerre was initially regarded as the principal inventor of photography. It was not long, however, before the legitimacy of this title fell under dispute. Other inventors, including Joseph-Nicéphore Niépce and William Henry Fox Talbot most notably, were seen as possible rivals. This debate about the rightful claimant, otherwise known as the ‘priority debate’, has remained an important issue for many photohistorians ever since.

Although Daguerre always plays a role in publications discussing the advent of photography, he is not always treated favourably. His reputation has become damaged over time as, intentionally or not, photohistorians fall back on clichéd arguments and generalisations.

Daguerre’s rivals, including Niépce, Talbot, and Hippolyte Bayard, are at times pushed by photohistorians, many of whom rely on various pieces of evidence to strengthen their cases, like lawyers in a courtroom drama.

What’s wrong with Daguerre? shows that wishful thinking and preconceptions, national pride and commercial attitudes play a significant role in photohistoric writing. Although the inventors are long gone and their processes have long since been eclipsed by modern techniques, the old rivalry between them continues. What’s wrong with Daguerre? explores the reasons why Daguerre and the daguerreotype are often devalued, and analyses why advocacy on behalf of Talbot and his calotype process has been so successful.

Hans Rooseboom is Curator of Photography at the Rijksmuseum in Amsterdam.

The lives of struggling artists

A remarkable affair involving a major auction house, an eminent photohistorian and an early photograph