The creation of a music video made from cyanotypes by the 3 artists: Dan Hermouet, alternative printer, godo yorke, singer and composer and Kotryna Daraškevičiūtė, video artist. The trio made their own negatives and photo-sensitive paper and printed about 7000 cyanotypes with self-made UV light box made from drawers. The prints then were washed in water, snow and immersed in river water, then finally put back into a video.

“Sometimes we spin so fast, that all that is left of us is a motion that can not be caught.”

We, as part of an efficient society, do so much and naturally, it has to be productive, effective, and useful – both in our jobs and sometimes even in our private lives. In these big cities of ours, where others are also spinning as successfully as we are, leaving after them nothing but a vortex made out of blurry colours and shapes. That is why it is so refreshing to see something done not for the sake of a time-efficient, comfortable and profitable result, but because it is done out of inspiration and creative thirst when the process is approached as a slow and full immersion. This kind of an example we see in a second in the world cyanotype music video “Wounded Angel” for the creation of which three artists united — musician godo yorke, in Panevėžys resident french photographer Dan Hermouet and filmmaker Kotryna Daraškevičiūtė.

Even though at first, the artists were planning to create the video in two weeks, the whole process took them about three months. As they say themselves in the documentary by Egidijus Kriščiūnas, in the period when the video was being made, it was mostly what their life revolved around. And knowing how many steps there were in each stage of the creative process, it is not at all surprising. After shooting an actual video, the artists made their own negatives and photo-sensitive paper, printed images with Dan Hermouet’s self-made UV light box made from drawers. The prints then were washed in water, snow and immersed in the river Nevėžis water. Finally, the prints were cut and fitted between 2 pieces of glass as if they were negatives captured with a photo camera. Playing with the light placement, diffusion and hues allowed for different tones and mood in the final image captured with an old analogue lens. After this, the shots were uploaded onto the computer again, synced and edited into the video. Therefore the water of Nevėžis that rinsed the pictures was not only directly involved in the making of the work, but also acted as an invisible and silent extra character, whose existence nevertheless could be very much felt. It seems only natural as the video in a way works as an ode to the city of Panevėžys.

“If computer graphics were used, non of this labour or time would have been necessary, but it is not only the result that matters — it is also the creative process that has been meditated, unhurried as well as the knowing that you created it yourself, using your own hands.”

After all, in this day and age, analogue photography altogether could be eliminated and instead give place to way more practical and effective digital photography. Despite all that, it is still very much alive and in a way, attractive. It tempts the creator with the possibility of unexpectedness, adventure, slowness and freedom to experiment, touch, discover and do it by yourself.

The artists did not expect for their artwork to be too surprising and that makes it even more unique, authentic and honest. Perfection is also not one of their aims — the visuals here are not too sharp or too polished. The shots that have been separated from one another are fluttering and dancing when they are finally merged again for the new life. Colours overlap and the shots glimmer kind of like they used to in silent movies or the programs that we watched as children on old TVs. At the same time, the imagery could be seen as drawings or hazy memories from forgotten places in forgotten times or the dreams and visions that lay somewhere deep in the subconscious. They are full of texture and roughness, which is almost palpable and has a possibility to provoke not only the sense of sight but also touch. Cold bluish tones complement the winter imagery that consists of the flowing ice circles or tree branches covered in snow. In front of our eyes, they have a possibility to become water lilies or palms with fingers spread open.

Everything here breathes melancholy. Like that Sunday atmosphere when you feel sad for unknown reasons, as if something in you was ending, even though it is not — there are many more days and weeks that are yet to come. That melancholy seems so Lithuanian to me — I see it myself in the faces of strangers, my friends‘ words, poetry, rain that washes the fields and the streets, the tone of the voices, our nature. Even the apartment building that godo yorke grew up in and that stands firmly behind her back in the music video seems filled with this mood. At the same time, a lot of light and hope is present — both literally and figuratively. The musician is singing “there must be something out there / waiting for me“ and in the video we can see how sunlight just keeps on shining between the tree trunks.
The “Wounded angel” music video talks about fluctuation, constant change and cyclicality — in nature, in city, in people. It is inevitable, natural, necessary, sometimes joyous and sometimes sad. How a human changes, grows up and grows old, so does the river always go. Water moves from one place to another and each time washes new stones laying beneath it. Seasons change, earth, trees and buildings get covered by snow and ice, but then it ends and here comes the spring again. The face of the city also does not stay the same forever — some buildings are being replaced by others and all that is left of their existence are writings, photographs and stories. In the video we see how the cinema “Garsas” is being demolished — it will be replaced by other, new buildings. The all-destroying jaws of the big machine eat up the concrete and lick its fingers. All that is left is the flickering sky behind it.
This artist trio reminds us that perfection, a lot of the time, is overrated and that the most interesting, intriguing things are often discovered by searching, by trying and by processes that are not always too easy or comfortable. And that analogue photography by no means ends with the static image — the field of opportunities it offers is so much broader! The artists take us to a space surrounded by bluish light that is full of both ever-changing movement and steady melancholy. Here we listen to music, remember the cities of our past, wander around, look inwards and dream without any rush. 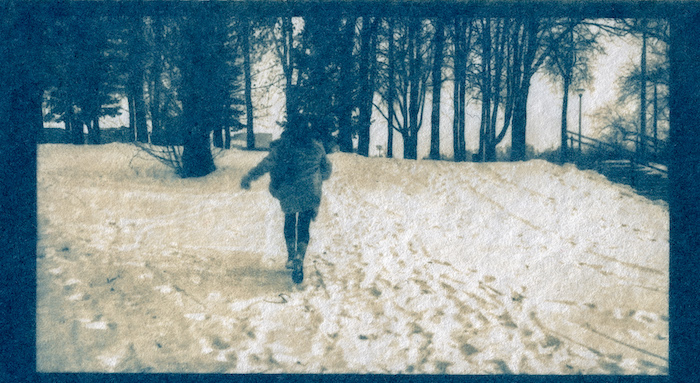