Nancy Breslin is inspired by the Stieglitz’s photographer Gertrude Kasebier. 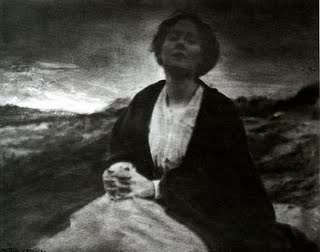 Long before I made my first successful gum bichromate print I was a fan of Gertrude Kasebier (1852-1934), who was perhaps the greatest American portrait photographer at the beginning of the 20th century. As a member of Stieglitz’s Photo Secession she was recognized as a fine art photographer, although she paid the rent as a commerical portrait photographer, working first out of her Brooklyn (NY) home and then out of a series of Manhattan studios. Many of her prints were done in platinum, but she also did beautiful work in gum. The brushy effects achievable with gum were of course appealing to the “pictorialist” photographers of the era (the name pictorialist, from what I understand, comes from the fact that at the time fine paintings were called “pictures,” and these photographers wished for their creations to be considered fine art as well; that was, alas, an uphill battle). I am drawn to Kasebier for a number of reasons. One stems from having taken a graduate seminar on “The Stieglitz Circle” with William Homer at the University of Delaware. I gave a presentation on Kasebier: many of her prints, notebooks and other items were left to UD, and I spent many happy hours donning cotton gloves and looking through the trove. As someone who discovered photography belatedly (I was almost 40 when I took my first photo class) I was pleased to learn that Kasebier began studying art at age 37. And much of her work has the soft dreaminess I value in my pinhole work and in gum printing. She remains an inspiration.