Part II in how to make a cyclops lense do what you want by fabricate the lens yourself from available components. Also read part I

Part I of this article dealt with my attempt to create some unique images by removing all of the original lens elements from certain lens barrels that I use with my 645 medium format camera system, and then attaching a single glass element I would remove from either old junk lenses, magnifiers, and even the plastic lens element from a non functioning video camera to these barrels, making them into essentially single element lenses.

Part II deals with the fabrication of a single glass element lens with exposure control from cheap, readily available components, in order to achieve imagery similar to that of the original Cyclops in Part I, without having to buy/modify someone else’s lens barrel and keeping the costs under $60.00. 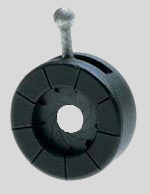 My search for components led me to OptoSigma, a Santa Ana-based manufacturer of brass or steel cased iris diaphragms designed for use in microscopes. Among the various configurations they offer, I selected a diaphragm whose brass casing was 60mm in diameter, 9.5 mm thick, and with an aperture opening from 1.5 to 40mm. I chose an iris diaphragm with these dimensions as it seemed roughly close in size to other readily available components that I intended to use with and/or attach to it.

OptoSigma diaphragms have a small actuating lever that allows the user to open and close the diaphragm easily. Incorporating this diaphragm into Cyclops II would allow me to control the aperture, and thereby, the effects the lens produced on my images as well as exposure.

I used a 2 stage epoxy to bond the step down ring to the iris diaphragm.

I purchased a Leica 39mm screw thread (LTM) body cap, which I took to a machinist who then milled a hole the center. The outside diameter of the hole ended just inside the cap’s 39mm thread. This created a threaded ring. Again, I used a two-stage epoxy to bond the ring to the back of the diaphragm.

I had intended to test Cyclops II with my medium format 645 system by using an aftermarket helical focusing adaptor, such as the Mini Makro Mount from Zoerk. 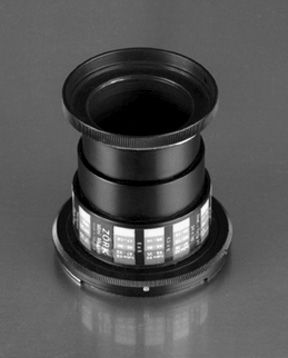 The Mini Makro Mount will attach to virtually any 35mm, digital, or medium format available, including many no longer in production. It was designed to work with a variety of lenses, including large format, enlarger, and standard lenses mounted with reversing rings. However, it also suited my purposes in providing a focusing section for Cyclops II. I contacted Zork US and explained my project. They were enthusiastic about the potential of my project, and loaned me a Mini Makro Mount with a front 39mm adapter ring with female thread and a rear adapter for my medium format Mamiya 645 camera.

The diaphragm has no f-stop markings so I ran a series of tests shots with Cyclops II with a Polaroid back on my Mamiya 645 to determine exposure values. The test shots gave me a rough approximation of how the movements of the diaphragm actuating lever corresponded to the size of the opening of the diaphragm at any particular point.

Since Cyclops two was going to be used with a helical spacer capable of a fairly long extension, these tests would only give me a rough approximation as to what f-stop I was at with the actuating lever at any particular position on this lens. I placed a very thin strip of adhesive backed paper on the front edge of Mini Makro Mount (just behind the iris diaphragm) and marked down a series of apertures from F2.8-F16.

Shooting with this lens element wide open, Cyclops II tends to render the center portion of the image as relatively clear with increasing softness towards the edges of the frame. I decided for part II of this article, to include a studio portrait with strobe lighting and the lens closed down to a fairly small aperture, somewhere in the ballpark of F8-F11. Closing down the aperture tends to make the entire frame relatively sharper (I say ‘relatively’ because a lens of this type will never produce the sharpness of a conventional lens).

My main motivations for creating both Cyclops I and II was to have fun, while also attempting to come up with a lens that produced some interesting and unique effects. Moreover, in writing these articles I wanted to share how easily and inexpensively these devices could be made, using off the shelf components. I hope the ease and simplicity of creating the Cyclops lenses will benefit those who wish to experiment, as I have, but may be unable to afford a machinist, lack the mechanical skills, or simply want to do a project like this without spending a lot of money.

I hope you’ve enjoyed the images from Cyclops and found this article interesting and useful. I also hope my results and project description has inspired you to take the plunge in creating your own specialty lens. I’d like to thank Malin Fabbri for allowing me to share this project with you. Best wishes and good luck with your project.

Jonathan Brewer has had an ongoing love affair with photography spanning about 35yrs. This was all inspired by his boyhood fascination with watching many of the hollywood black and white ‘Film Noir’ classic films. As a result, he purchased a Nikon FTN and started photographing street scenes, people and anyone who came to MacArthur park. Later he turned to studio portraiture.
Jonathan was accepted in the Producers Guild trainee program as one of the first trainees for an assistant cameraman, and for several years worked as an assistant cameraman, from which he was able to learn theatrical lighting.
Jonathan Brewer now has his own business which specializes in portraiture, in additon to his personal work and projects, including an ongoing project, ‘Bahia in 1/15 of a second’, and his latest project ‘Metal’, much of which is shot in infrared. E-mail Jonathan

Cyanotypes – A New Look at an Old Technique

Glossary and explanations for Digital Negatives