Jonathan Brewer sought a special effect in his images. Rather than altering the image he invented a new camera. Here is how. 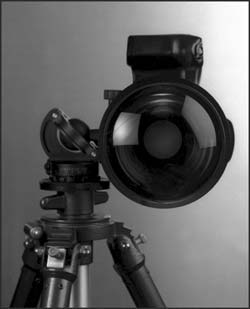 I’ve always been interested in imagery that had the wonderful qualities of a painting, instead of photographs that just looked like photographs. I wanted to create something that produced LESS detail as opposed to the increasingly finer detail produced by today’s modern lenses. I decided to fashion a lens that would create images similar to the images created by lenses manufactured around 100 years ago. I would try to create a lens that conveyed feeling, and softness, and atmosphere, and mood, as opposed to just fine detail. That’s how project Cyclops began.

Cyclops wouldn’t have the wonderful lens coating, and computer designed lens elements of the modern lens, quite the opposite. Cyclops would be designed using simple glass, to create a very simple and crude lens.

The idea has been tried before by others, by means of attaching a simple glass magnifier, or lens element from an old junk projection lens, or close up diopter, to the front of a lens barrel which has had its own native glass elements removed. This results in a single element lens, for the purpose of creating uncorrected images. Russian photographers call this type of lens a ‘monocle’. This was my starting point.

My original prototype for the Cyclops, which was based on the idea of the ‘monocle’, incorporated a huge glass magnifier, which I coupled to a 150mm leaf shutter 645 medium format lens barrel which has had its own lens elements removed. This configuration looks like ‘an all-seeing eye’, and so I’ve named this prototype and the modular system of interchangeable lens barrels and lens elements that evolved from that prototype… Cyclops from the Greek myth.

So, what’s the difference between Cyclops and other ‘one off’ prototypes that have been ‘tinkered’ together by others? The single element lenses or ‘monocles’ created by many others involved a piece of glass which was in most cases permanently fixed to a particular lens barrel, with no way of removing that glass in order to experiment with something else. I wanted to address this problem by creating a system that made the single element lens or ‘monocle’ modular, that is, making everything interchangeable.

I addressed this problem with Cyclops by looking for and purchasing
old junk lenses where front and rear elements were encased in threads so that they could be unscrewed out of their a lens barrel. I then began disassembling these junk lenses looking for front and rear lens elements with threads that would match the standard accessory filter thread sizes of any number of step-up, step-down rings (to adapt filters to a lens with a larger or smaller diameter than the filter) macro rings, and spacers available on the market today.

I removed the lens original lens-elements from the two lenses which I intended to use in this project and which already fit my medium format 645 camera system. I acquired a third lens which already had its native lens elements removed from S. K. Grimes, which was, in its past life, a large format barrel lens. What remains is a two inch barrel or shell, an iris diaphragm, and a slot for Waterhouse stops.

Considering the number of old junk lenses, diopters, magnifiers, and/or optical glass originally intended for other applications, a Cyclops can be created utilizing glass from nearly limitless sources.

Almost every component except the adaptor for the 5″ diameter magnifier which Scott, the owner and inventor of Acratech, machined everything already existed. When I first showed Scott this humungous magnifier, he was incredulous! The adaptor fashioned by Acratech, which holds the magnifier in place and allows it to be connected with the front accessory threads of my lens barrels, is a thing of beauty.

Anyone can duplicate this project for around 100 USD, assuming you already have a lens from which to strip the lens elements. A good place to start looking for a lens barrel with the elements already removed is Goodwin Photo Inc., in San Diego. They have a number of these with iris diaphragms and slots for Waterhouse stops available for approximately $65.00 each.

These three configurations seem to me to produce the most varied and unusual kinds of imagery.
– The 5″ diameter magnifier coupled with the 150mm leaf shutter lens barrel/shell allows the use of higher shutter speeds when using my studio strobes, this combination delivers very soft texture and a muted tone which is pretty much evenly distributed throughout the image.
– The rear element of a Kodak anastigmat projection lens coupled to my 80mm medium format 645 lens takes in a wider angle of view and delivers a slightly soft rendering of the central portion of an image that slowly/smoothly increases in softness toward the edges.
– I’m also using my 80mm lens barrel/shell with a lens element from a defunct video camera, and it is this combination that delivers the most drastic effects on an image, effects that are abrupt and striking, with a very small portion of the central image appearing relatively sharp, and everything else disappearing under a totally uncorrected ‘veil’ toward the edges.

The process of assembling a lens on my own was easier than I expected, and I wished that I’d tried this a long time ago.

What was unexpected was the unpredictability of how each image would turn out, each image is different in terms of color, texture, and what is in focus, which is what I love about how this turned out.

The total cash outlay for the glass elements I used for the representative images shot with ‘Cyclops’, was 26 USD. Go for it.

Part two chronicles the creation of a prototype that should be considered the next step in the logical progression of the Cyclops experiment. That is, the creation of a complete lens, with glass and exposure control from cheap and readily available components, without having to buy/modify someone else’s lens barrel for a grand total of 60 USD.

Jonathan Brewer has had an ongoing love affair with photography spanning about 35yrs. This was all inspired by his boyhood fascination with watching many of the Hollywood black and white ‘Film Noir’ classic films. As a result, he purchased a Nikon FTN and started photographing street scenes, people and anyone who came to MacArthur park. Later he turned to studio portraiture.

Jonathan now has his own business which specializes in portraiture, in additon to his personal work and projects, including an ongoing project, ‘Bahia in 1/15 of a second’, and his latest project ‘Metal’, much of which is shot in infrared.