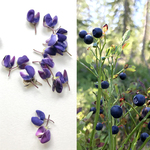 Challenges or observations:
The pH of the lupines affects the blueberry color and clarity.

… the images are brought back to the land from which their subjects once left. Here, images from the archive are combined with plant-based emulsion and sunlight to create the anthotype, a plant-based photographic process invented in the early 1840s. Until recently, anthotypes have been largely ignored for their inherent impermanence; the inability to remain fixed. This trait, once seen as a drawback, is re-envisioned in Återvändarna / The Returners . The archival images are digitally captured and reworked before being exposed on hand-dyed paper for 2-6 weeks in the brief, but intense, summer sunlight of Northern Sweden. The emulsion itself is made from plants found nearby my home including wild blueberries (often described as a native plant tied to the Swedish self-image) and lupine flowers (often described as an “invasive species” brought to Sweden from North America circa 1870). The act of harvesting the plants offers space for contemplation and the processing of the emulsion is just that – a processing. Traces of plant material create images and associations of their own, leaving behind the mark of the landscape in the emulsion. The resulting anthotypes are an integration of time and place. The process returns the archival image to a state of transition while simultaneously connecting the work with the land and its history. The works return migrants to their transient fates while inviting us to contemplate the impermanent nature of the human condition.