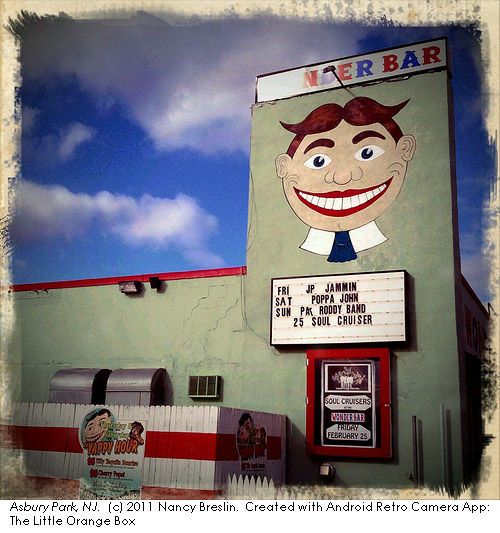 I got my first smart phone a month ago. Of course I checked out the apps right away. I love having BBC news at my fingertips, and Sudoku and Angry Birds are great for when I find myself waiting somewhere without a book to read.

But I’m really loving the Retro Camera app. I can use my phone to take pictures which resemble Polaroids, pinhole shots on 35 mm film, and even gum prints. Even the regular camera on my phone (I have a Samsung Captivate) has a “vintage” setting which vignettes the shots. But the Retro app is particularly fun. I spin through a choice of cameras, pick one, take the picture, and then (after a delay during which I see the door to a darkroom) the image shows up on a clothesline! Of course any image can then be on flickr in seconds.

This is not, however, causing me to abandon “wet” photography. I’m teaching alternative processes at the University of Delaware this semester. My class is starting with pinhole cameras (one group of students chose to blow up balloons and cover them with paper-mache – I was skeptical, but their cameras are functional!). We’ll move on to cyanotype and VDB, toy (film) cameras and gum dichromate (carefully saving the initial soak water from the sewer system). UD has downsized its darkroom program, but is still offering black and white printing and alternative processes in a newly renovated space. I don’t think any digital print can compare as an object to a gum print done on 300 lb paper, and silver gelatin should at least be explained to every beginning photo student (light-sensitive silver molecules seem more intuitive, to me at least, than digitized voltage). My other class is a (digital) introduction to photography and video, and those students will also have a taste of “old school” photo with the option of using Holgas for one assignment, and another project which loosely incorporates cyanotype and video.

Will the Retro Camera apps of the world turn people off or on to film and older techniques? I’d like to think they will help keep these approaches alive. About half of the students in one of my classes already own a toy camera, so they are presumably seeing and being attracted to the unique look of these tools (thanks, Urban Outfitters!). Just as Pictorialism was a reaction to the conservative camera club mentality of a century ago, the growing popularity of alternative/pinhole/toy camera photography (and the experimental and chance aspects of the same) makes sense as a response to the increasing ease of creating what are often banal but technically sound images with digital cameras (with their sophisticated image stabilization, evaluative metering, auto white balance, etc.). As millions (billions?) of people work digitally, the few, the brave, the curious will still find a better creative outlet in film and hand coated papers. I hope some of my students will join their ranks.