Nancy Breslin reports from the AIPAD shows where she found more than a few gems. 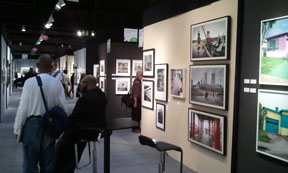 I spent several happy hours on March 18 at the Park Avenue Armory in NYC, attending the AIPAD shows. The Association of International Photography Art Dealers brought 70 top flight galleries together under one roof. Talk about being in a candy store!

Work ranged from a Fox Talbott photogenic drawing and vintage daguerreotypes to contemporary work (Starn twins, Cindy Sherman), with many of the usual suspects in between (Brassai, Weston, Cartier-Bresson, Kertesz, Atget…). As expected, I was particulary drawn to alternative work, and there was plenty. Dan Burkholder had some stunning platinum and palladium prints over gold leaf, both urban scenes and isolated stands of trees. Cy DeCosse had lovely large prints of fruit and flowers in platinum and in gum, and the same gallery also featured Joy Goldkind’s bromoil figure studies. I had not seen Abelardo Morell’s new tent camera work before, where landscapes appear on pebbles or tiles or whatever ground is under the tent, and are then captured photographically. One wants to linger over each of these huge prints, feeling the pull of inside and outside.

Apart from the work of Anna Atkins, I haven’t come across many beautiful 19th century cyanotypes: the process seemed to be used mostly for proofing or by amateurs. So it was interesting to see the landscape work of Henry P. Bosse from the 1880’s and 1890’s. 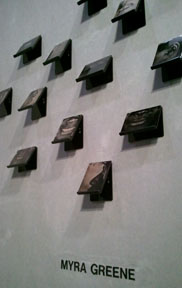 Several other artists were also new to me. Susan Burnstine had prints from homemade cameras (with homemade lenses): charmingly distorted cityscapes. There was a display of 20 or so ambrotypes on black glass by Myra Greene , from her “Character Recognition” series, a powerful comment on race, beauty and lingering stereotypes. Carrolle Benitah has a striking approach to family portraits. She enlarges old snapshots and works them with thread and beads, in ways that elicit thoughts of sex and violence from these otherwise benign-appearing images.

In addition to the alternative work, I was most taken with several photographers working with children. While there are exceptions (such as the work of Loretta Lux) I usually find photographs of children (and pets) cloying. Several artists at the AIPAD show won me over. One was Cig Harvey, whose isolated children all look somehow worried and tentative. Julie Blackmon’s small subjects are sometimes alone and sometimes have adults around, but the focus is on the children. All feature beautiful lighting and composition and more than a little chaos. It reminds me of Crewdson’s work, but more personal. I was also glad to again come across Trine Sondergaard’s window-lit portraits of girls in traditional Danish headwear.

It was my first AIPAD visit in several years – I should try to make it annually.

The Legend of Casein and the Cruel Dragon: Dark Horizons

How to make salt prints – the video