Late, but not too late in life, Will Dunniway pursues his passion for the wet plate collodion process.

There aren’t many who find their passion later in life and then spend most of their waking hours pursuing it. Will Dunniway is one of those lucky few.

For as long as he can remember, Will, 61, has been enthralled with 19th century tintype (also known as wet-plate collodion), a type of early photography he’d seen in Civil War books as a child. When, in 1988, he ran across renowned contemporary tintype photographers John Coffer and Claude Levet at a Civil War reenactment, he felt he’d “found the keys to the kingdom…

says Will, a lifelong history buff who was born and raised in Colton, in Southern California, but spent 30 years as a graphic artist in the Santa Cruz Mountains. He retired in 2003 and moved to Corona, where he lives with his wife, Frances. “I’d always wanted to do it myself, but I didn’t know how. When I found someone doing it, it was love at first sight.” Will worked as an apprentice under John Coffer (who is so besotted with 19th century life that he lives in a cabin with no electricity or running water in upstate Dundee, NY), and soon became an expert himself.

Now one of the few authentic collodion photographers in the world, Will began his apprenticeship with John by letter (John had no phone); the only way they could speak was when John called Will collect from the local hardware store’s pay phone. After a year of learning this way, Will reached John’s former apprentice, Claude Levet in Virginia, and Claude took over where John left off. Soon after, Mark Osterman, curator of historic processes at the George Eastman House in Rochester, NY, the world’s oldest photography museum, and his wife, France Scully Osterman, both high caliber collodion artists, entered the picture.

Will practiced by making and selling tintypes and ambrotypes (same as a tintype, just on glass) of re-enactors at historical events — from reenactments of the 1850 Gold Rush to the Battle of Gettysburg. Will continues to work these events, like “a living historical demonstration,” charging around $50 for a 5-by-7 tintype. Will now also does landscapes in wet plate collodion glass negatives and teaches the process throughout the Western America.

What is ‘Wet Plate Collodion?’

Will uses only original equipment, choosing from one of his seven original wet-plate cameras and an array of 22 original lenses. These lenses are all handmade with hand-ground glass, giving the wet images a very different look than you would see with modern optics. These old optics tend to have what is called a “sweet spot” in the center of the image — as these images radiate outward, the sharpness falls off. The result is delightfully ethereal, almost dreamlike in appearance.

The process is also color blind. It cannot “see” blue, and it “sees” red as black. This means that if you are a redheaded person with freckles, the tintype made of you will be very harsh. Blue eyes disappear; red hair turns black; freckles become black blemishes. These problems can be corrected with white cornstarch. “You have to work with each person in their individual appearance and dress, seeing each person with trained eyes as if there was a blue filter between you and the model,” explains Will.

Time-consuming, costly and tricky (Will’s tools include heavy wooden and brass hardware 19th century wet plate cameras with large brass lenses), the process requires its practitioners to make exposures on glass or blackened-iron tin plates, each one at a time while the plate is still wet. The collodion solution (nitro cellulose in ether with the addition of alcohols) is ‘salted’ days before with iodides and bromides to prepare it for the silver nitrate solution that makes the collodion wet film on the plates sensitive to light. Prior to a one day shoot, it typically takes another day just to prepare the chemicals and gather the gear. Not a casual affair.

Once exposed, the image is developed using iron sulfate and acidic acid mixed with water, rinsed and fixed in potassium cyanide. The resulting images look eerily like they came straight out of the Victorian age, complete with pathos and intensity.

Wetplate collodion photography was given much attention in the 2005 “Into the West” miniseries, executive produced by Steven Spielberg, when a character marries a photographer and falls in love with the work herself. Will is enamored as much with the look and artistic aspect of collodion photography, which he describes as “painting with light,” as by the practice itself. It is a practice he is committed to replicating as faithfully as possible. “I’m not a carnival photographer,” he says. “I don’t dress people up. I’m interested in history, and I wanted to master the process as the early photographers had. Now, when I read about the early photographers and their problems with dirt, dust, rain or bad chemistry, I understand exactly what they are talking about because, even though I was born later, I have become one of them.”

For Will Dunniway, collodion photography represents the perfect combination of history and art; the perfect interplay between the past, present and future; between old glass, wood, chemicals and the weather; between luck and sweat. “It’s what makes me who I am,” says Will. “When I found collodion photography, I knew I had found what I wanted to do with the rest of my life”.

A version of this article originally appeared in the Los Angeles Times, 2007. Will has published two books.

The Wet Collodion Plate: 16 Steps To Making The Plates

The veteran of collodion demonstrates in easy steps how to make plates. 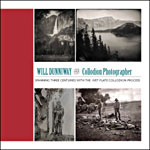 Will Dunniway’s portfolio book in limited edition. Including 140 images.
Beautiful.

1 thought on “Will Dunniway: A man with a mission”