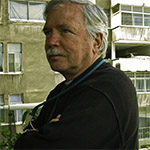 Walter Crump is a fine arts photographer whose primary alternative photography practice is constructing and photographing with pinhole cameras. He also captures the his environment with Holga Cameras and on occasion makes Cyanotype prints.
From: Winston Salem NC he has lived in Boston Masatuchutes since the mid sixties.
Shows: Pinhole, Holga and cyanotype prints 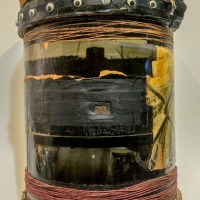 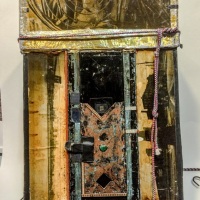 Trained as a painter and printmaker, Crump gravitated to photography after he was asked to teach a course in photography at Commonwealth School in 1986 where he had been teaching printmaking since 1972. He had never worked in a darkroom. As his interest in photography grew his attention to printmaking waned. Crump primarily explores alternative ways cameras see the world. Using both traditional, digital, handmade pinhole and Holga cameras, he tends to explore a more subjective approach to photography producing photographs that hover between photography and painting, leaving time, and words behind.

Heavily influenced by the painter Walter Murch, he has had an ongoing fascination, mechanical and electronic detritus of our culture. Over the years, he has collected and photographed objects discarded from the fading industrial world, fragments of defunct mechanisms, mangled circuit boards, worn gears and tangled rusting whackamadoos. Like Morandi, who arraigned and rearranged his dull crockery to create his luscious, nuanced paintings, his constructed still lifes are not permanent; once photographed, they are dismantled, only to be reassembled in different configurations. He thinks of these impermanent structures as “machines without a purpose” or “machines that have lost their purpose”. He sees them as metaphors for evolving/eroding metropolises or ambiguous edifices, elusive images appearing as cloudy wrecks of a dubious age, blending fiction and reality, shivery things surviving on the edge of memory.

Walter Crump is a Fulbright scholar; his photographs have been exhibited in the US, Europe and the Middle East. His work is collected both in US and international museums.

Built From Scratch: Adventures in X-ray film photography with a homemade 11×14 view camera