Henk Thijs gives us the basics on the oilprint process.

Always be careful when handling chemicals. Read the health and safety instructions.

When I started my first bromoil prints and asking questions on “the list” some 10 years ago, one of the responders just told me to stop that ‘crap’, just do the ‘real thing’: oilprints. His argument was that real bromoil-papers were not on the market at that time, and the results on the PE-based Fotokemika (from a factory in Zagreb) was “rubbish”, like other printpapers.

But, the reason that I wanted to do the bromoil process was the fact that I could use the enlarger and did not have to make enlarged negatives, for me an added burden that comes with the alternative processes. Hence I started doing bromoils and forgot all about oilprinting.

Some years later I was intrigued by the discussions on “the list” concerning gumprinting. I started printing gum with waxed Xerox negatives, and was surprised by the results. The step to Arista halftone negatives was a very small one.

The oilprinting really intrigued me again after seeing an exhibition in Charleroi in Brussels, of Missonne, an old master of oilprinting. He wasn’t doing just the romantic landscape stuff, but also interesting street-photography. The obstacle of enlarged negatives was gone, and I had a lot of large negatives from the gum printing I had already done, that could be used to make oilprints.

The first try was a real gem. I got enthusiastic and prepared a lot of paper. For weeks everything went wrong. I wasn’t able to come close to the first result. I checked all the books I had for information on oil-printing. After a lot of testing I found that most of the recipes were incorrect.

I finally figured out what worked for me, and that was: 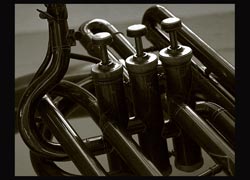 I must admit that I cannot give some real technical information concerning the negative. I just make a positive on PE-paper (gradation 1 or 2) and sandwich with an Arista APH lith film (from Freestyle) under the enlarger (in my case a bulb of 150 Watt in the enlarger, with a distance of about 50 cm and the 50 mm lens fully open at f=2.8 for about 30 seconds). I develop this in Dektol 1:10 for about 150 seconds. 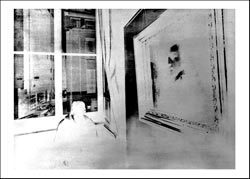 The numbers I mention here is just to give you an idea, so you can make your own tests. After some tests one gets a feeling for a right negative, and the advantage of oilprinting is the fact that it is a “forgiving” process. A lot can be corrected during the inking.

Images right and below right: Oilprint on Fabriano no 5 – 350 gram paper. Negative made using normal colour paper via Photoshop.

I also discovered another way of producing negatives by accident: I detected that certain colour prints from the drug store on the corner had no logo-printing on the back, no Agfa stamp and no Kodak stamp. 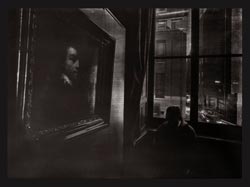 Because the prices were so low for making poster prints I made a negative, produced via Photoshop, printed on this standard colour paper. I didn’t try making it transparent. This kind of plastic paper doesn’t allow some oil for transparency; the exposure times are very long, but that doesn’t bother me; most of the time I work on different prints at a time. The paper as such requires long exposure times, but the results were perfect. More about this here: Making negatives in Photoshop or Gimp.

To summarize my way of working:

2Coat the paper with a 5 % potassium dichromate. Let dry.

3Put the negative on the paper, cover with a sheet of glas and put under a UV-light source. Expose. Make several exposure strips on the same paper. The final result shows you the right exposure times.

4Wash in water of about 20 degrees Celsius. Take care to make sure that the whole paper is under the water. I put several cotton balls on it to keep it under the water. If you have some spots that are not correctly washed out, you cannot correct this later, no way!

5Dry, and you have your matrix for inking.

From here see the article The Bromoil process. 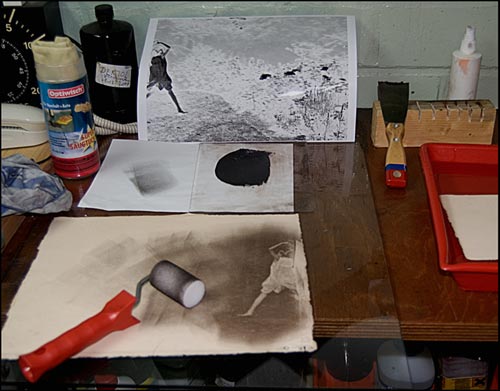 I do not use the special brushes (I had problems with a mouse RSI, and the hopping with the brushes was a painful exercise) but foam rollers; I use amongst others, David Lewis bromoil inks, all sorts of lithographic inks, plus ordinary oil colours or pure pigments to handle the thickness of the ink. After initial inking I spray water over the print and go over it with a clean roller to increase the contrast. 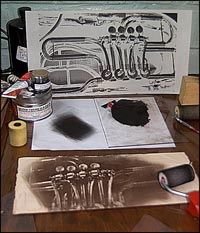 Image above right: An example of a test with a colour paper negative; exposure time about 25 minutes under a Philips HPR 125 Watt bulb.

Image left: Example of a test with a negative made by an Epson inkjet printer on Simili Japon 130 gram paper, made transparent with sunfloweroil. Exposure times about 400 seconds.

Henk Thijs is a bromoil artist from the Limburg region, south of the Netherlands.

The Mordançage background and process

5 thoughts on “The oilprint process (Thijs)”