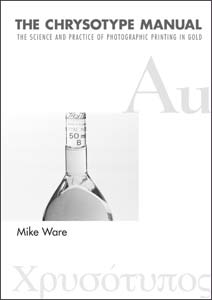 $50   for paperback including shipping, or buy both The Chrysotype Manual and Gold in Photography together for 105 USD.
Shipping: The book usually arrives in 2-4 weeks.

Intended for advanced practitioners of the photographic arts.

Reviews of The Chrysotype Manual:

“These books are fascinating to read…”

“…of all the alternative process instruction manuals I have ever read, this one is easily the clearest, most comprehensive, and best written.”

“The books themselves are really excellent, I was very impressed with them and excited to follow instructions which were clear and concise… The purchase of the chrysotype books despite there quality, has meant a wast of resources for me. If only chemical prices were more accessible…”

The Wet Collodion Plate: 16 Steps To Making The Plates

Gold in Photography: The History and Art of Chrysotype