Alternative printers, especially those working in platinum/palladium, living in the Dallas/Ft. Worth area can view some spectacular work by photographer, Michael Massaia. 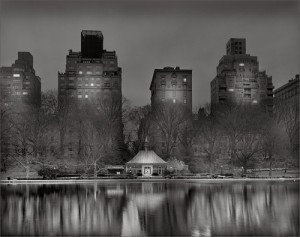 Alternative printers, especially those working in platinum/palladium, living in the Dallas/Ft. Worth area can view some spectacular work by photographer, Michael Massaia. On exhibition at least through the end of the month at Afterimage, Michael has almost three dozen fairly large pieces portraying vistas from Central Park, Chinatown, and an amusement park. Printed on Bergger Cot 320, Michael has rendered each scene in a stark, highly detailed, ethereal style. Most notable on several prints is what appears to be a burning and dodging technique which helps lend an unusual, misty glow. Absent from each scene are people and motion which only intensifies the mystery and intrigue. As a New Jersey raised fellow, I was especially drawn to the seaside boardwalk prints as they brought back memories of my many childhood trips to the shore. Ah, but Michael has taken those familiar places and reshaped them into venues of an other worldly nature, one that would make Rod Sterling or Alfred Hitchcock proud.

This link will take you the Afterimage site where you can preview Michael’s work, find the gallery business hours, and get directions: http://www.afterimage.com/massaia.htm. While you’re visiting, take some time to see other alternative/historical process work from hand-colored Polaroids, to tintype, to tricolor gum bichromate. Ben Breard, the gallery owner and director, will be happy to meet you and answer any inquiries. I cannot speak highly enough of Ben’s warm spirit, good nature, and thorough expertise. So take an opportunity to see Michael’s work and more—I guarantee you will not be disappointed!

1 thought on “Spectacular Platinum/ Palladium Work in the Dallas/Ft. Worth Area”