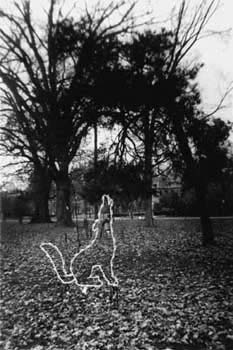 In our high tech world toy and pinhole cameras remind us that a camera is just a light-tight box with a hole (aperture) at one end to admit light that strikes some light-sensitive material opposite from the hole. Cameras define and shape an image, which make them a basic component of the photographic language. To limit the choice of cameras is to reduce what one can photographically express. Building these rudimentary devices can acquaint beginners with how a camera functions and remind seasoned workers to concentrate on the subject of their imagemaking rather than the technology. Their plainness and lack of controls makes one stop worrying about doing the right thing and see what happens by allowing the snapshot elements of chance and surprise to enter into your pictures. Although there are serious photographers who use these simple machines for picturemaking I have used my recent experiences with them as an opportunity to re-examine everyday life while out with my dogs.

The Holga 120SF ($24.99 or the 120S without flash $16.99) is a remake of the toy Diana plastic camera, and like its progenitor each Holga has its own particular attributes that gives the images a unique aura. The Holga delivers sixteen 6 X 4.5 cm exposures on 120 film, large enough to compensate for the viewfinder’s inaccuracy by cropping during printing. The Holga has a 60mm, f-8 plastic lens and four focus settings from 3 feet to infinity with a single shutter speed of about 1/100 second and two f-stops, f-8 for cloudy and flash and f-11 for sunny. The built-in flash produces two flashes. The first when you press the shutter and a second when it is released. The exposure is made with the first flash while the second does not seem to do anything except wear out the batteries. The flash only has an effective range of about 8 feet, but I did use it as a fill with some success. 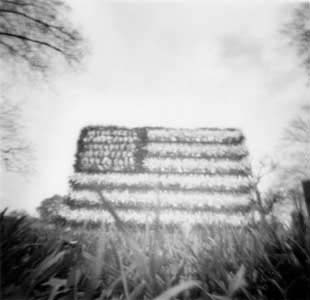 The Holga’s lack of embellishments and plastic lens led me to concentrate on uncomplicated compositions based on line and texture as opposed to detail.

Unlike my Diana F, the Holga did not leak light and made very good negatives, maybe even too sharp for some. My negatives were underexposed in less than sunny conditions, even using 400 ISO black-and-white film.

If you can keep the camera still, it has no tripod mount; it is possible to build exposure by repeatedly clicking the shutter since there is no double exposure prevention. To prevent double exposures, advance the film after each shot. Or take advantage of it by making intentional double exposures. For the price one can think of the Holga as experimental camera that allows you to do things you would never consider with your regular camera. Want to make long exposures? Remove the shutter spring and glue the shutter to the open position and use the included lens cap to control exposure time. Need a softer, more impressionist look? Apply Vaseline or fine sandpaper the lens. Want a filter? Tape plastic ones over the lens or even apply transparent.

Robert Hirsch is an author of many photography books a few of them listed below. You can also read more about Roberts work on his website.

Photographic Possibilities: The Expressive Use of Concepts, Ideas, Materials, and Processes

Seizing the Light: A Social & Aesthetic History of Photography