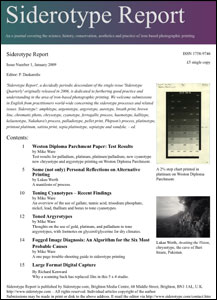 Buy the e-journal for 3 USD

Or buy the collection of Mike Ware’s digital downloads on Siderotype.com

Buy the collection for 6 USD

The ‘collection’ is all the downloads together – that means five files: Making Digital Negatives, the 100 step test negative (.tif file), Siderotype Report 1, Siderotype Quarterly 1, and the short (1.5 minute) Quicktime film Coating Paper with a Glass Rod with Mike Ware.


The book can be downloaded directly from Siderotypes.com after purchase.

An e-journal dedicated to furthering good practice and understanding in the area of iron-based photographic printing and related issues.This is delivered as an instant download in PDF format, and includes a gratis copy of its predecessor, the original ‘SidQ’ released in 2006.