The field of alternative process photography is ripe for the harvest in a fine-art world where large color digital works are the norm. A new monograph has recently entered this field, and quietly so—a fitting entrance for an unassuming man who has dedicated his life to teaching and practicing the art of photography and alternative processes for no less than forty years.

In the mid- to late-1800s what we now call “alternative process photography” was the norm. Photographers were falling over each other to discover the next greatest thing, write the latest book, file the latest patent, and be accepted into the latest salon. Processes such as daguerreotype, carbon, gum bichromate, platinum, wet-plate collodion, and salted paper were argued about ceaselessly in the photographic societies of the day.

Enter gelatin silver paper, and these processes took a back seat to the sharp ‘n’ shiny school of thought that gelatin silver paper spawned, so much so that for most of the 1900s photographers did not even know “alt” existed, and much less did they practice it. It wasn’t until the counterculture generation in the 1960s and 1970s with its “anything goes” attitude that a renaissance occurred. During this time period, Sam Wang discovered these antique processes and set about incorporating them into his art. 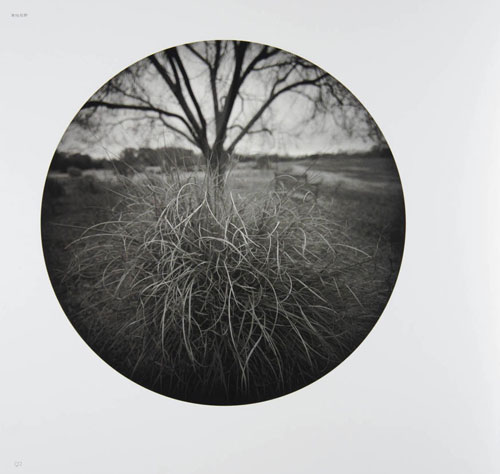 The trap that can occur with a love of process is that the technical discovery becomes the passion and the imagery less so. We’ve all seen technically astonishing yet predictable photographs. Wang’s work is testimony to a man who has never subsumed imagery to process. Process is secondary in this monograph, but to this reader’s delight, there is a thumbnail Index of Images in the back of the book that indicates the processes used. Over half the images are traditional gelatin silver film which ironically is fast becoming yet another alternative process, and the rest infrared, zone plate, pinhole, altered lens, Polaroid, casein, silkscreen, gum bichromate, color copier, cyanotype, and combinations thereof.

As can be deduced from Wang’s book, with only a mere 10 paragraphs and three categories used to explain four decades of work, he is a man of few words carefully chosen. In fact, it is his former students—of whom this reviewer is one—who speak his testimony. There are two essays in Chinese by those who have come to know Wang in the last decade. Even though Wang is Chinese-born, he immigrated to the States when he was 20 and has lived here since, mostly in South Carolina. A beautifully executed introduction by David Vestal completes the writing within the book’s covers. Vestal talks of Sam’s sensitive and flexible eye and mind that matches the sensitivity of his images and models. I think Wang’s students may add to that description a mention of Wang’s quiet yet inflexible stubbornness, a quality that is of utmost necessity in a forty-year teaching and art-making career.

Wang’s hallmark subject is the figure in landscape, mostly nude, mostly female, and that at a time when the female nude was becoming increasingly politically incorrect. As the politics of the body swirled in the ethers, Wang quietly continued to create his poetic work. Over half of the 140+ images are the figure in landscape. The other half the landscape is devoid of figure. There is a smattering of figure devoid of landscape and a still life here and there. This comprises the contents of the book. Lest the reader think the figure in landscape is an easy mark, try going out on a photo shoot with Wang and a model, and then compare results. Wang’s figures are well integrated into the landscape, sometimes so much so that they hardly appear. The form the body takes may mimic the form the landscape reveals, or the body may be tucked hither and thither, or even so far away in the distance that it becomes a game to see if there is a figure even there. That the body is unclothed is often inconsequential in the images, because the body is so well integrated into the landscape. 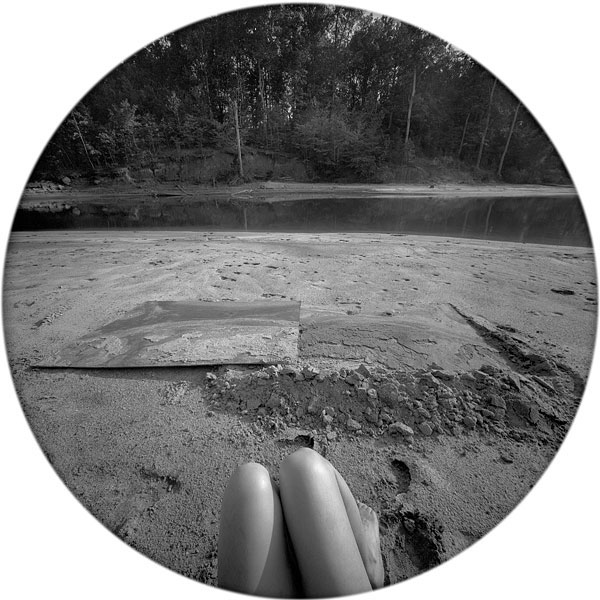 Lack of clothing enhances the timelessness of many of the photographs. By no means does this imply that sensuality is not an important element in most of the images. In fact, sensuality is enhanced by Wang’s use of an intriguing circular format in place of the usual photographic square or rectangle.

Since 1978 Wang has been using a 50mm medium format lens on a large format view camera (a technically inappropriate “fit” that will not cover the whole film plane with image) to derive circular images. With the wide-angle lens and this resulting ocular framing of the subject matter, the viewer feels instantly part of the scene in a very perceptual, tactile way. Part I of the book contains 80 of these circular images, and if the book is perused from front cover to back, there is an odd jolt when the frames transition to rectangular format, an indication of the power the circle exerts.

In some of these circular images, the body asserts itself boldly, in sometimes distorted, malleable ways. A pair of knees juts into the bottom center of the circular frame. A curved back arches down, its bony spine pressing against the skin so firmly it is as if the viewer can feel each vertebra. In one image the nude is draped across a sea of abandoned tires in the forest, a favorite image for this reviewer. 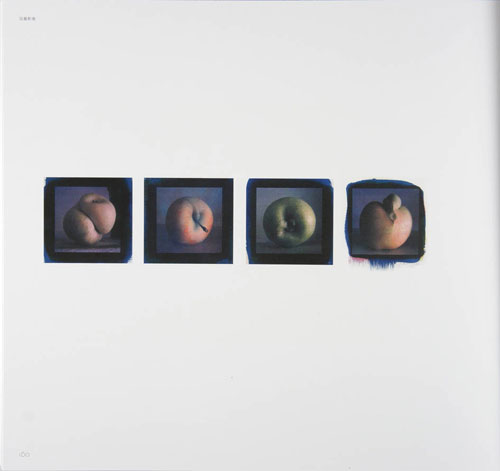 The landscapes-sans-figure are equally as appealing as the figure in landscape. Many are unremarkable scenes made remarkable by the photographer. In one, tangled grass in the forefront evokes a macro tangle of human hair. This image is juxtaposed on the facing page with a lone tree, its few remaining leaves dangling, ready to succumb to the next slight breeze. Rocks and trees are transformed into monuments. A slight waterfall rains down on the central rocks as if straight from heaven. Circular tire marks mar a country road and find their raison d’être within the complement of the circular frame. A tarred roadway crack that should obviously lie flat appears to leap off the pavement and stand vertically. It is apparent that Wang gave much thought to the placement of the images in the book both in linear and proximal relationship. 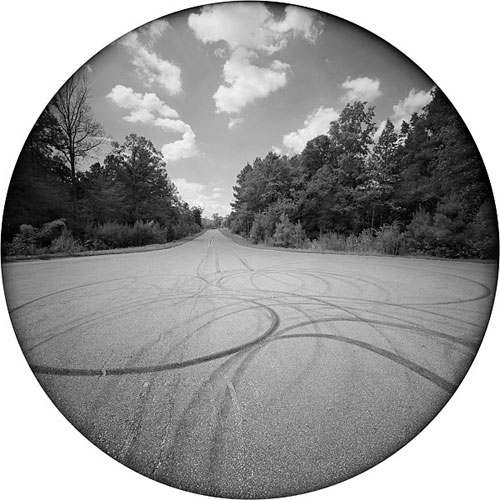 Wang has divided his work into three somewhat arbitrary categories: the Simple Image, the Indistinct Image, and the Layered Image. The first refers to the circular “straight” photographs on film. The second refers to the use of pinhole, zoneplate, or other inexact lenses as a counterpoint to the sharp images of the day. The third refers to multiple or layered imagery, whether evident in the image itself or merely a method of process (gum bichromate, silkscreen). One can only imagine that trying to condense four decades of work into tidy categories is probably impossible, and there might be other, and better, ways of doing so than Wang has chosen. For instance, there is nothing “simple” about any of the images, much less the circular ones. The “indistinct” blurry images are distinctly palpable. The layered images are unified. And there are a few images in the book that need more explanation for their inclusion, and so many more that this reviewer has seen in person that should be in the book.

Whatever the case, the book is a testament, a culmination of a life’s work of a man who is still, after 40+ years in the field, excited about photography. And after 40+ years of teaching in the field here is a man excited about making new work. His work from the earliest images to the most recent are contemporary yet time-less, exotic yet banale, quiet yet insistent. It is work that has contradictions and raises questions and makes the viewer want to run right out with a camera and explore those ripe future discoveries within reach of one’s lens. We teach by example, not by word. By Wang’s example his students and now his viewers of this book will be ever grateful.

Read more about the book.