Scott Wittenburg shares his thoughts on the unpredictable Polaroid SX-70 process, a process that make Polaroids looks like watercolor using a Polaroid camera and time-zero film.

The tools you need to make Polaroid SX-70s

There’s something very special about creating SX-70 manipulations. Like so many other alternative processes, that…

…I have no idea how this is going to turn out…

…feeling is always there right from the start. This is often combined with the inevitable feeling of not really knowing where to begin once you select your tool of choice and start the actual manipulation process. But all of this mystery is part of what makes the process so enjoyable and addicting. And if you love to paint, you’re going to love this.

It all begins with the purchase of a pack of Polaroid SX-70 Time Zero film, an instant film that has been around for over 30 years. Finding this film can be somewhat tricky, since the only type of camera designed to use it hasn’t been manufactured in over 20 years. But not to worry – the film is still available at many film stores and there are plenty of the cameras available on e-Bay and at garage sales, usually at fairly reasonable prices. Furthermore, if you can’t find an old SX-70 camera, there is a way you can adapt the newer One Step 600 cameras to accept the film.

Once you’ve obtained your film and camera, you’re ready to begin the next step: choosing a scene to shoot. There is a slight catch to this though: some SX-70 cameras have limitations with regard to final image quality and only the SLR folding models (see illustration) will give you the option of selective focusing – as close as 10.4 inches – and viewing your exact composition through the viewfinder. I’ve had little success getting a crisp usable image with the cheaper fixed-focus cameras. Compounding the problem is the fact that Time-Zero film is fairly slow with an ISO of 150, thereby prompting the use of a tripod in low light situations. There is no shutter speed control on these cameras whatsoever – it’s either slow or even slower!

I usually choose a subject with a lot of bright colors and little if any “dead space” in the composition. The general effect of an SX-70 image manipulation is a sort of impressionistic painting quality that begs for the use of bright color. Dull or neutral colors can make for disappointing results.

Once you’ve found the perfect scene and shot it, the fun really begins. Depending on factors such as ambient temperature – the warmer the weather the faster the development – and the emulsion characteristics of a particular pack of film, you will need to manipulate the emulsion before it totally sets. The optimum time for manipulation can be anywhere from immediately after the film pops out of the camera to as long as 24 hours. My best results have typically been an hour or two after exposure. Experiment! 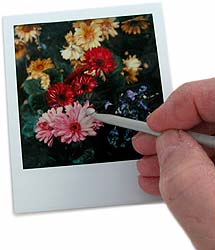 The actual manipulation process involves the movement or “pushing” of the viscous photo emulsion located directly under the clear protective mylar film with some kind of tool. The tools I have used vary from ball point pen caps to crochet hooks to sharpened dowel rods to clay modeling tools, each tool yielding different results. Experimenting with tools is another of the gratifying aspects of the process! Once you’ve chosen a tool that is not so sharp as to damage the mylar, yet pointed enough to afford some degree of control, press the tool against the mylar with medium pressure and watch the colors start to swirl and blend together. If you’re lucky and the emulsion is just at the right consistency, you will almost feel as though you are painting the image with a palette of wet paint!

Exactly what portions of the image to manipulate and what to leave alone often becomes a real challenge. Do you want to keep the main subject crisp and untouched and simply manipulate the background or vice versa? Or perhaps you want to manipulate just part of the background and all of the main subject. How about manipulating the entire image? This decision-making process can become frustrating and actually drive you crazy if you don’t have a backup print just in case you make a bad decision. Which is why I always shoot at least two or three shots of the same scene. But then, this is what makes this wonderful art form so gratifying the first time you get everything just right.

Another concern is what stroking technique to use while manipulating the emulsion. I sometimes start out with a sort of swirling clockwise motion and stick with it as long as the result looks promising. Other times I’ll try diagonal strokes repeatedly while other times I simply trace or outline one or more of the image components and take it from there. A light burnishing motion with a flat tool tends to slightly blur and distort the image, which can lead to fantastic results. A combination of any or all of the above is yet another possibility. You’ll have to plan on a lot of experimentation and several ruined images before you finally find a technique that works for you.

There is no “set in stone” science to SX-70 manipulations, which is what makes it so challenging and unpredictable. My advice is to simply take your old camera out on a nice sunny day, shoot a 10-pack of film of interesting and colorful scenes, then go back home and get down to business. You will almost always come up with at least one manipulation you’ll be proud of!

Recommended reading on Polaroid Emulsion lifts and transfers, and suppliers

Tutorials from the winner of the Nikon Certificate of Excellence.