Cody Goddard discovered a process to use the throwaway side of 669 film to make an additional print. 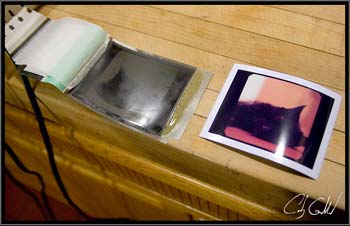 This process allows you to make a polaroid transfer after having made a fully developed print using 669 polaroid film. It uses the black side of the peeled-apart process, a “garbage product” of the process.

Start by making a print normally. Keep the black side. I have used this process with images up to 20 hours after development. It works best with images shot within the last half hour – it seems to work easiest if they’re still a little damp, so I often stack them in a plastic bag so they don’t dry out too much. As time goes on and they dry out more the effect is similar to traditional transfers, where the darker areas in your picture start to get tacky and tend to rip. This may be solved by longer cooking times, but I have not yet done enough experiments to find out. 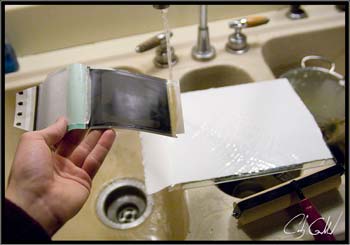 Thoroghly wet a piece of paper. I use warm to hot water, but have not experimented with cold. I use Rives BFK paper and have not yet had a chance to try any other papers. BFK has a tad bit more surface texture than I would like – you may want to try with smoother surfaces. I have used both the front and back of BFK paper and found that there aren’t any problems with absorbtion on the front. The back of BFK tends to absorb things like cyanotype better, but has a rougher weave texture and tends to “tuft” a bit. I use the front side for this process. Be sure it’s plenty wet, or you will rip the surface layer of your paper off when your remove the polaroid. 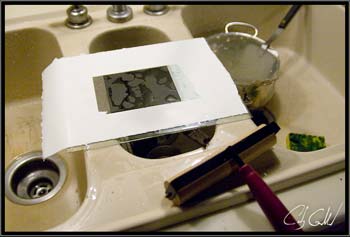 Place the image facedown on the sheet of paper. I use a 8×10 piece of glass for my working surface. Your surface will need to be portable, fit in a microwave, and (as you may have guessed) be microwave safe. 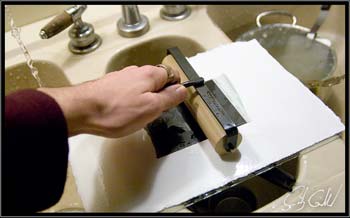 Once your image is positioned, roll outward from the center with a printing roller or similar tool. This is to remove air bubbles and finalize the positioning of your image. At this point I keep water running on the back of the image. Most of the failures that I have had with this process have been due to not enough water, so I try to flood it. 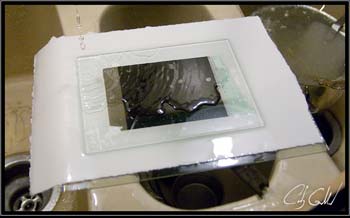 I then use a small (5×7) piece of cut glass to apply pressure to the image. When putting the glass down, start with one edge against the paper and the opposite end in the air, then slowly lower it, letting the running water fill in the space. It is important to get a fairly even fill of water in this area so the image will heat evenly and won’t dry out. Often at this stage I then hold the layers of glass together and pour off the extraneous water. The water between the paper and the smaller piece of glass will be held in place by surface tension. You can see in the image that I have four or five small air bubbles. I lift the edge and lower it quickly to try to flush those air bubbles out.

At this point you have a choice.

You may choose to just let the image sit for about ten minutes, then remove the glass and peel the picture off. You will have a light image rendered in peach and navy. It will be sharper than if you continue. However, It will not have as much depth. I have only tested this with relatively fresh images. I find the results to be less interesting than if I continue with the process. 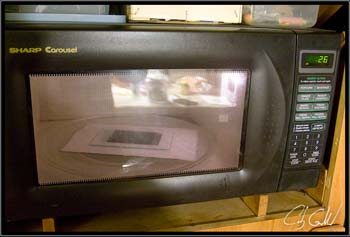 I then take the sandwich and put it in the microwave, watching the smaller piece of glass to make sure that I am not losing the water. I then microwave the sandwich between 30 seconds and a minute on high. This stage makes the darkest areas separate from the black side and allow for them to transfer, much in the same way as the dark areas transfer in a traditional polaroid transfer. The lighter areas will be peachy tones regardless. Because there is a significant amount of water in this process, often the dark areas tend to take on the appearance of emulsion lifts.

When the timer is done, remove the sandwich from the microwave. It will be HOT, so don’t grab it until it has a little time to cool. At this point I take the image back to the sink and remove the top layer of glass, then let some water run on the image again. The areas that were not under the glass will have started to dry, and occasionally patches in the image have dried out so I give it some time to absorb more water. 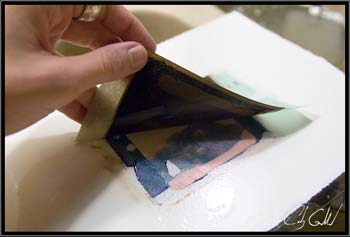 Slowly peel the black backing from the piece of paper. If all went well you should have an image. 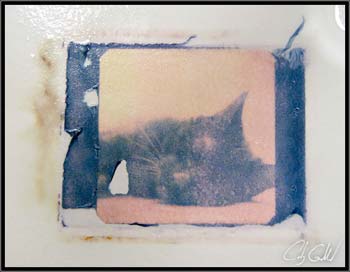 As you can see, the darker areas have the appearance of a polaroid emulsion lift.

The image with its corresponding print. You now have two images for the price of one!

The transfer will not be as dark as the print. Images with areas of black will tend to look better than overexposed images. The transfer tends to increase shadow detail and drop highlight detail.

The only time I had the process entirely fail was the one time I prewet the black side of the polaroid with water for a few minutes before applying it to the paper.