An extract from Laura Blacklow’s book New Dimensions in Photo Processes written by Jesseca Ferguson and Walter Crump on how to make a pinhole camera.

In an age when experience is becoming more virtual, the handmade aspects of photography become more important to the maker and the viewer alike. Contemporary images may be hybrids that combine digital methods with hand coloring, collage, and a nineteenth-century technique or two.

Whether you think of your pinhole camera as a sculpture that takes pictures, a recycled object, or a large-format camera, it will be uniquely yours. You can customize, decorate, or embellish your pinhole camera any way you like. The design of your camera, when exhibited alongside the images it takes, can make a visual or political statement not possible with any other imaging method. There are many reasons to experiment with pinhole photography: the incredible distortions you can get in your images, economy, infinite depth of field (all objects depicted are equally in soft-focus), multipinholes (allowing multiple views simultaneously, large or unusual formats, etc.). Almost any object can become a camera!

Please read the Safety section in the book to become familiar with proper handling of darkroom chemistry.

Materials for a pinhole camera 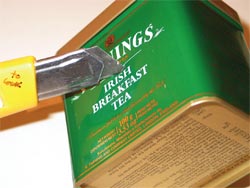 Creating the Camera
Once the camera-to-be is chosen, spray paint the interior matte black (unless the interior is already a dark, nonreflective color). Double check for potential light leaks (such as around the hinges and handle of a child’s lunchbox) and repair them with black photo tape. Next, using a mat knife or a drill bit 1⁄2in. (1.25 cm) or larger, cut a small window in the side or end of your camera, preferably centered (for better image coverage). As this opening will accommodate your pinhole, be sure to make it smaller than the approximately 1×1 in. (2.5×2.5 cm) square of metal containing your pinhole. File and sand down the rough edges around this window carefully, so that your pinhole metal can be taped in place snugly behind it (using black photo tape). 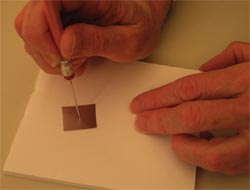 Making the pinhole
To make the pinhole itself, cut an approximately 1×1 inch (2.5×2.5 cm) square of metal, and place it on a piece of cardboard or foam core. Using a sewing needle with the blunt end covered in tape or embedded in the eraser of a wooden pencil (in order to cushion your finger) or pushpin, press down into the center of the metal square until the needle pierces the metal, leaving a burr on the opposite side. 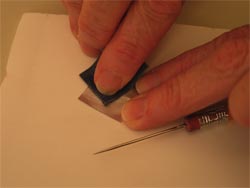 Refining the pinhole
Sand the burr down, using emery sanding paper, on both sides of the metal. Reinsert the needle into the hole as needed to drill and burnish the inside of the pinhole by gently spinning the metal around the shaft of the needle. Your goal is a perfectly round hole, free of metal debris, in a smooth metal plane. Holding the metal up to a light source, use a film loupe or magnifier to verify that your pinhole is round and free of debris. 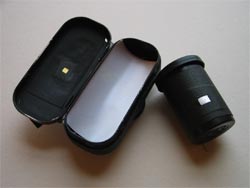 Inserting the Pinhole
Center the pinhole behind the larger opening in your camera, and tape it into place with black photo tape. Attach your black tape shutter flap and you are ready to go into the darkroom and load your camera. 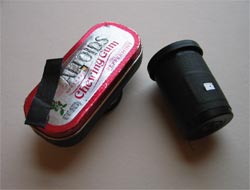 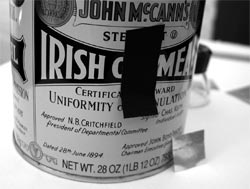 Making an exposure
Work outside (faster than inside) for your first exposures, using a mixed light and shade situation and facing away from the sky or direct sun. Work closer to your subject than you normally would with a lens camera, and time your exposure in seconds or tens of seconds, even minutes, depending upon the light situation. To expose, remove the tape shutter and replace it at the end of the exposure.

7Developing the negative
In the darkroom, unload the “negative” from your pinhole camera and develop your ortho film or photo paper. Develop by eye, in paper developer (1–2 minutes), followed by stop bath (30 seconds), and fixer with hardener (5 minutes) for film, without hardener for paper. Water rinse as the manufacturer directs (shortened for film by using fixer remover).

Experiment, get to know your camera, have fun—and welcome to the world of pinhole photography!

– Using black photo tape (with one end folded back for easy accessibility), make a simple shutter to place over the pinhole when not exposing your film or photo paper.

– For exposure times, work by trial and error, keeping the following four factors in mind:

– Angle of view (normal, wide angle, telephoto). To get a “normal” looking image, measure your film/paper diagonally, then build a camera with a pinhole that is that same distance away from the film or paper. Thus, to produce a “normal” 4×5 in. pinhole image, build a camera that is 6 in. deep (the diagonal measurement of the 4×5 in. film). This 1:1 ratio is based on human sight: the diagonal measure of the receptors in the back of the human eye is equal to the eye’s diameter. (“Normal” presumes that your film plane is flat, not curved, as in an oatmeal-box camera.)

– Image coverage/focal length ratio. As the cone of light entering your camera from the pinhole is interrupted by the plane of film, you will get different areas of coverage, depending upon the distance between pinhole and film plane (focal length). Pinhole expert and author Eric Renner discusses what he calls “the image-diameter-to-focal-length ratio” in his book Pinhole Photography (see Annotated Bibliography). Image diameter is approximately 31⁄2 times the size of your camera’s focal length. Thus, a 2 in. deep camera would give you approximately 7 in. coverage (7 in. diameter circular image). Keep this ratio in mind when making multipinhole cameras.

–  Image coverage and avoiding unwanted vignetting. The camera-to-be should not have thick walls, lest you create a “tunnel” effect that prohibits the light admitted by the pinhole from exposing much of the film or photo paper in the camera, thus resulting in a vignetted image. If your chosen camera object has thick walls, simply make the original hole larger in order to permit a broader beam of light to enter the camera interior.

– Reducing potential glare. The back of the pinhole metal may be blackened with marker to reduce glare, but be careful not to accidentally “fill in” your pinhole with ink.

– Pinhole size.  Any size hole will work, with a smaller hole yielding a sharper image. For details on aperture size and focal length, see Chapter 5 of Eric Renner’s Pinhole Photography or Jim Shull’s The Hole Thing.

– Built-in holder for film or paper. If you will be using a consistent size or shape of film or paper, you can make a simple in-camera film holder using channels cut from foam core or mat board, glued into place opposite the pinhole.

–  Avoiding unintended blurring of image. Keep your camera steady on a firm surface throughout the entire exposure. (Move camera or subject for deliberate blurs.)

– Troubleshooting negatives. If your negatives are completely dark, or are dark in certain blotched or streaked areas only, your camera may have one or more light leaks. Check your (empty) camera for light leaks by peering inside as you hold it up against a light source. Make any necessary repairs with black photo tape or black acrylic paint. If you can see some image, but the overall negative is too dark, you may be overexposing your film or paper. Reduce the light entering your camera by shortening exposure time or by exposing in a less light-filled setting. (Rarely will you need to correct overexposure by making a smaller pinhole.) If your negatives have little or no image at all, you may simply be underexposing them, given the light situation, pinhole size, camera depth (focal length), and speed of film or paper you are using. Possibly you may have forgotten to open the shutter, or have loaded the film or paper backward (emulsion side away from the pinhole).

Jesseca Ferguson and Walter Crump are Boston-based artists who have worked with pinhole cameras for many years—Crump since 1987 and Ferguson since 1991. Their pinhole work has been published, exhibited, and collected in the United States and abroad, and they have each taught numerous pinhole workshops.

Clear instructions in step-by-step to many of the processes.

Digital hybrids: A new twist on an old process