Nancy Breslin goes to the Phillips Collection to see “TruthBeauty: Pictorialism and the Photograph as Art, 1845–1945”. 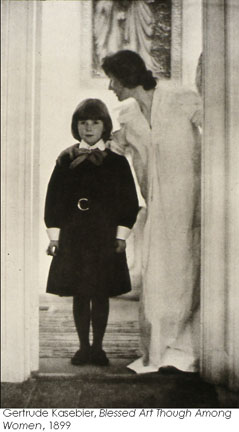 Two weeks ago I saw a lovely show at the Phillips Collection in Washington, DC. TruthBeauty: Pictorialism and the Photograph as Art, 1845–1945 is a large show that begins with the work of some pre-pictorialists (e.g. Julia Margaret Cameron), moves through the work of the pictorialists themselves (Coburn, Kasebier, White) and ends, after Stieglitz embraces modernism, with images by those such as Outerbridge who were trained by or influenced by the Secessionist artists yet worked in the sharper, tighter, modernist mode. It is a great show for those with an appreciation for what we now call “alternative process,” since processes such as platinum and gum were major tools at the time.

Of particular interest may be several examples of the same negative printed using different processes. A smaller, partnered exhibit is Coburn and the Photographic Portfolio. Both shows run through January 9th, and more information on the museum is at phillipscollection.org.

An interesting tie-in to the exhibit is a competition that the Phillips is running, called InstaVintage, in conjunction with ReadysetDC. The “challenge” is to use your phone to take a picture in DC and then to transform it, using a phone photo app, into a pictorialist image. The deadline is 9 am on November 4. See http://readysetdc.com/instavintage/ for details.

I suspect that Kasebier would be charmed by the idea, but that Stieglitz would roll over in his grave.