Jim Read proves yet again that – with a little work and a lot of imagination – photographic materials doesn’t have to cost a fortune.

The end result of this process is a printing plate made from light-sensitive plastic using a photographic image, which is then printed with an Etching Press. The process is ideal for those who look for an impression of their images rather than a highly detailed representation. Benefits from the process are the use of completely non-toxic materials some of which can be bought from the local shops and the absolute permanence of the image, the inks become part of the fibres of the paper they are printed on.

My researches led me first to Solar Plates, great I thought until I saw the price and went on to thinking that I’m going to make lots of expensive scrap as I’ve done with any new process that I’ve tried. I’m a person of limited means and prefer “kitchen table methods” and like to use ingredients from the local shops.

Further research led me to Photopolymer Film, which can be attached to homemade plates and is quite inexpensive, I buy mine from a lady in Guernsey called Sally Dyas, it’s called Photec and I also use Z*Acryl made by Mark Zaffron which is obtainable in the US and from Polymetaal in Europe. 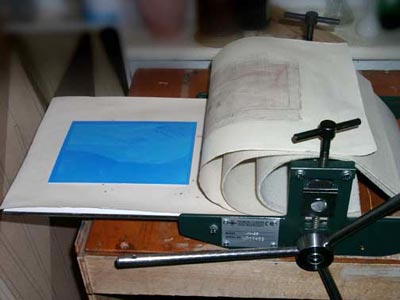 Having sourced the film I found out that the only way to stick it to a plate was by running it through the Etching Press and so made the decision buy one. This led me to Polymetaal in Holland, a very friendly company who sell etching presses at very reasonable prices and lots of other things too.

Whilst thinking about plates I recalled a modelmakers material called Plastikard and went and bought a few sheets from my local model shop. Plastikard is a very hard plastic material sold in different thicknesses, I use the 0.030″ sheets to make my plates and find them very good indeed.

The photopolymer film comes on a roll and should be opened in a dim room and under a yellow light, one of those from your local hardware store made for electric fires. I put the plate onto the film and cut around it leaving a border. There is a protective layer on both sides of the film and the backing one must be removed in order to attach it to the plate, the backing is on the inside of the roll. Double sided tape is useful here, put a strip on your bench, stick a corner of the film to it and pull away, this will separate the backing from the film and you can then pull it off.

Everything must be CLEAN from here onwards, otherwise, nasty bits get between the film and the plate. Make a sandwich on the press bed: a sheet of paper some lining wallpaper is very good and cheap, then a piece of Plastikard bigger than the plate, then the film face down, the plate is then carefully dropped on the back of the film, then another piece of paper on top of this for the film to stick to and yet another piece of larger paper, then the thin blanket and finally the thick blanket. Roll it through the press slowly with quite a lot of pressure, i.e. you need a fair amount of strength to turn the spokes.

Remove the sandwich and cut the plate from the paper with a sharp craft knife, I have put velvet material around the top of a tight fitting draw to make it light tight and I put the plate in there. Leave it for a few hours to adhere properly before exposing it to the positive.

Positive, yes, for those used to photography it seems entirely wrong, but to make an intaglio print a positive transparency is needed. The shadow areas being denser render the light-sensitive plastic softer than the highlights and therefore they etch more deeply then the harder highlights. I use Photoshop and pick up the scanned or loaded image, get it to the right size for the plate, convert it to Black & White adjust the contrast and then using Curves leave the Input at 0 and convert the output between 65 and 80, that’s it, print it onto a transparency sheet! Depending on the printer you use, there may be settings for ‘fine dithering’ and ‘error diffusion’ use the latter, it produces a positive without obvious lines. You can also download the curve used and import it into Photoshop.

This will produce a ‘straightforward’ image and though it is possible to get a print from this type of positive it may be more useful to use some of the tricks Photoshop has up its sleeve. For instance, converting the image to a Bitmap and from there adding a Half tone screen this is probably the best way to get a reasonable image if you are a newcomer to the technique. Using the Noise filter is a good way of getting a plate that will print well. Try as many techniques as you can and you will soon come up with something that suits your temperament and way of working. 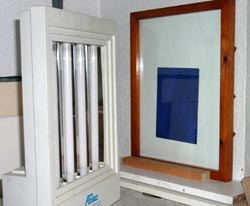 Now we bring the two together, I have a homemade contact printing frame and put the plate and transparency together in that, emulsion to plate. The sandwich is now exposed to UV light, you can use the sun but it’s very unpredictable especially here in the UK. I use a facial tanning solarium as a UV light source, these can be bought quite cheaply at car boot sales and through eBay. The solarium is placed 12″ from the printing plate and for Photec I expose for 30-40 seconds and the Z*Acryl for 50-60 seconds.

The next step is really kitchen sink stuff, the plate must now be etched, still in the dim light with the yellow safe light on. Have ready the etching bath, two teaspoons (10 grams) of household washing Soda (Sodium Carbonate) in one litre of water at 18-21 C, pour this into a tray (from the garden centre or a cat litter tray from the local pet shop). Put a corner of the exposed plate into the bath for about ten seconds, take it out and with the skin on your fingers or palm loosen the top protective layer and then peel it off. Carefully put the plate in the bath, pushing it down by the edges only. Etch for 7 minutes for the Photec and 8 minutes for the Z*Acryl without any agitation or rubbing with a sponge, the depth of etching can be checked by inspection, let the water run off and look carefully at the highlights and shadows.

Great care is needed for the next steps, I don’t use gloves for the above, if you have sensitive hands I suggest you do. Either way you are going to have the etching liquid on your fingers and you must get rid of it otherwise it will drip onto and damage the plate, causing the dreaded “printing blobs”.

Make up 1 litre of plain water and 1/2 litre of water with about 5 ml of White Vinegar (Acetic Acid) added to make a Neutraliser/Hardener, both at about 20 C. Put the plate in a large tray and pour the Neutraliser/Hardener next to it and let it drift over the plate, leave it there for a while and wash your hands (or gloves) to remove all traces of Soda.
After a couple of minutes wash the plate in the plain water.

Leave the plate to dry in a dim light and when dry expose it to the UV light source for at least twice the amount of time needed for the image exposure, or leave in a room that does not get direct sunlight for an hour or so, this completes the hardening process. Up to this point handle the plate by the edges only it will still be soft.

Put the plate on some absorbent paper and gently blot it with some
kitchen roll then leave it to dry in a dim light and when completely dry expose it to the UV light source for at least twice the amount of time needed for the image exposure, or leave in a room that does not get direct sunlight for an hour or so, this completes the hardening process. Up to this point handle the plate by the edges only, it will still be soft. 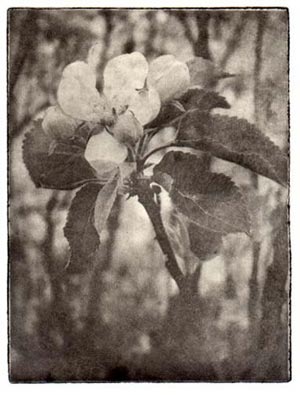 After that we come to the creative bit, inking the plate, I use Akua Color Intaglio inks, these are water based, very dense, easily washed off with soap and water, are non-toxic and can be used in an unventilated room. With a bit of stiff card draw a small quantity of ink and spread it over the plate carefully and evenly. Take a sheet of newspaper or a page from an old telephone directory lay it on the plate and with the flat of your hand press it down and smooth it across the plate, remove and discard.

Having removed a lot of the unwanted ink the plate can now be gently wiped with a sandwich of thin nylon material and dishcloths bunched up and sewn into a pad, the idea is this; because the nylon is not very absorbent, slight pressure removes a very small amount of ink, a little more pressure and more ink is absorbed by the dishcloth, do it very gently with light circular movements. After this use some newspaper or old telephone directory pages as a gentle final wipe using just your fingertips. The idea is to remove enough ink to make the picture you want, it is at this point that the mechanical processes described above ceases and the art of Intaglio printing begins.

When the plate has been wiped it is placed face up on the press bed, the damp printing paper put on top, another sheet of paper over the whole, then the blankets and then it is pulled through the press. The blankets push the paper into the indentations of the plate drawing the ink out and also push the paper round the edges of the plate to make the distinctive ‘plate mark’ that identifies an etching. A good indication of the pressure needed is the quantity of ink left in the plate, hardly any with the right pressure.

The process once learned is quite straightforward and the results on a paper made for the process like the English Somerset Soft White are absolutely gorgeous.

Jim Read is a UK based photographer and often prints cyanotypes.

11 thoughts on “Photopolymer printing on a budget”