I just spent a few days in New York City and, with the The Photo Review as my guide, visited a number of exhibitions.  Being short on time, I stuck to large venues rather than independent galleries.  Each place I visited had work on view of potential interest to alternative photographers, although much of it wouldn’t quite fit into “alt photo” as defined by this website. 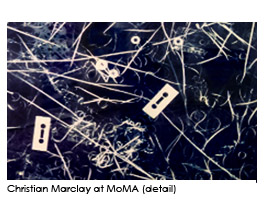 I started at the Museum of Modern Art, with A World of Its Own: Photographic Practices in the Studio.  While designed to show work taken within photographers’ studios, rather than alternative techniques, a surprising amount of the work is experimental in nature, such as a large photogram by Adam Fuss created by having a snake slither on a piece of talc-covered photo paper, or a grid of Polaroid self-portraits by Lucas Samaras. A huge cyanotype photogram by Christian Marclay is as musical in form as the presumed contents of the cassette tapes and their tangled guts which were spread on the coated paper to create the image.  The show runs through October 5.

While the MoMA show includes work dating back to the 19th Century, What Is a Photograph?  at the International Center of Photography features work since the 1970s that has, according to curator Carol Squiers, helped “reinvent” photography.  Lucas Samaras is featured again, this time with manipulated SX-70 self-portraits, as is Adam Fuss, with three photograms that capture movement in water. Photograms by Floris Neususs include one taken with the paper placed emulsion down out of doors, with the abstracted natural forms created by flashing lights through foliage from various directions.  Matthew Brandt exhibits a large color print of a lake which was degraded by leaving it in lake water, causing the various emulsion layers to peel in places (creating an effect, on close inspection, not unlike mordançage).   Alison Rossiter processes expired film and paper (some dating to 1910), with varied and often striking effects.  Also cameraless is the work of Marco Beruer, who sands, brushes, heats and otherwise marks photo paper, creating colorful abstractions.  The show runs through May 4.

The Guggenheim has a show of the Italian Futurists, which includes some experimental photography such as double exposures and photocollage.  Far more interesting to me, though, was the work by Carrie Mae Weems, seen  in a 30 year retrospective.  While most of her photography is “straight” in one sense, she often adds important layers of meaning through color-toning the prints and/or the addition of text. 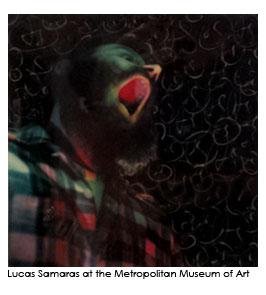 The Morgan Library has a delightful show,  A Collective Invention: Photographs at Play.  Photography is a new “curatorial focus” at the Morgan, and I certainly look forward to more of their offerings.  This show consists of a daisy-chain of images, each one linked somehow (concept, color, subject matter…) to the ones before and after.  For example, a photogram  by Christian Marclay of a hand and a vinyl record is followed by a Sid Tate photo of Lenny Bruce with a tape recorder (antiquated audio link), which is followed by a lenticular postcard of a burlesque performer (Bruce and the performer both worked in night clubs), to an anonymous “fotoescultura” (photo portrait of a soldier on a molded support, so this and the lenticular image both appear 3-dimensional), to a whimsical collage by Ray Johnson that includes a dollar bill and a photo of Josephine Baker (she and the soldier are wearing hats at jaunty angles).   I smiled my way around the room.  This exhibit runs through May 18.

The Metropolitan Museum of Art, my last stop, features a surprise echo from MoMA and the ICP.  Lucas Samaras: Offerings from a Restless Soul is a solo show spanning two galleries.  On view is work in many media, but included are more manipulated SX-70 self portraits as well as a playful and colorful 6 foot panorama of his studio space, consisting of many vertical slivers of Polaroid prints.   His show runs through June 1.  And if  you go to the Met, don’t miss William Kentridge’s The Refusal of Time, a 30 minute video installation that places the viewer (and a mechanical set of lungs) in the center of metronomes, a silhouetted marching band, mad inventors, a kitchen drama, Kentridge’s erasure doodles and the artist himself.  At the end I felt like I was getting off a joyous but also unsettling amusement ride. It runs until May 11.

Ceramics and photography – a beginning

Taking the picture – pinholes and f-stops