Carlo Ponzoni designs a lens. In the first part of the article he works on dimension and aperture.

“Being experimental photographers, like me, many of us are probably charmed by self-made single lenses.”

I have discovered that an additional motivation to build your own lens is that soft-focus professional lenses optically do the same job of a homemade lens. When I say that I mean “optically” in terms of the resulting image. The mechanics of a homemade lens can however be more difficult than that of a commercially made lens.

When I built my lens, I followed the ideas and suggestions from Exploring Simple Lenses. The result: my first monocle photographs. Nice… but I have been a bit disappointed by my own approach.

In fact, despite that the above book gives many examples on most common focal lenses, fitted with rigorous data to build each of them, at the end I assembled two cans in a more or less random way, equipped with basic, qualitative know-how: That to focus infinity I needed the shortest barrel length, that I have to take into account the camera “front body – film” distance, and that the nearest subject I can photograph demands to fully extract the barrel.

A second aspect completely out of control (tackled by the e-bible in a devoted chapter but not quantitatively), was the relationship between the aperture and the resulting softness degree.

At this point I decided to quantify both the mechanical design and to understand some guidelines to address my experiments with soft-focus.

Looking at the various published photos shot by monocles, I realized that I prefer this technique for portraiture more than for landscapes or other subjects.

So my examples are developed on the settings (frame-filling, camera to subject distance, depth of filed) which are typical of this photographic gender.

Where to start making a lens?

The focal length of the lens is the first parameter we need.

Let’s suppose for the moment that we have this parameter, as well the lens’ clear diameter (if not, I’ll explain later how to tackle it).

Equipped with the above two numbers we can answer to our first question to design the system: what has to be the minimum and maximum barrel length to focus?

Yes, simple. But still we have no idea of the dimension of our barrel. So, if we think that it is not paradoxically to be supported by a personal computer to enter primitive photography, let’s go ahead with the spreadsheet.

Dimensioning the barrel by a spreadsheet

The dimensioning of our device demands just plain algebra. So a piece of paper and a pocket computer is virtually all what we need. A spreadsheet helps.

It is easy to write this “program”, you can also download the worksheet. This tool can be used, reused and improved, if you find room to do so with this elementary program!

To prevent unintentional modifications, only the green, data entry cells are accessible.

To modify the sheet just unlock it.

So let’s see an example based on the lens I’ve assembled and tested:

As we can see, we need some additional information to make practical use of the formula describing the relationship between the lens focal length, the distance from the film and the subject distance. In fact we have to set a limit to the subject nearest distance, because the lens has to travel further and further to the film/detector plane to making focusing possible.

The idea is to ask ourselves what is the size of the subject we want to photograph on our film (which has a certain size, too).

I’m using a 35 mm camera, so the longest film dimension is 34 mm and I want to make portraits, up to include just the face and a part of the neck. This means that I want to focus about 400 mm on 34 mm film (we shot vertically). This also imply that if we want to fill the film frame just with the subject’s eyes (let’s say putting the camera horizontally so to image some 150 mm of subject size on 34 mm film size), we can’t do it with this minimum distance focus.

(So, why I have not inserted 150 mm of subject size, or less, to dimension the lens for more flexibility and not to preclude this possibility? Let’s see later).

On the contrary the sheet assumes that it will be always possible to “retract” the barrel to focus infinity, as it happens in a commercial lens, for which is specified just a minimum focus distance.

Note that if a cell values seems not consistent the cell assume an orange background, while comments are displayed by passing the mouse over the text.

This column is sided by a sketch of the barrel and the hood:

Now let see why – if we stick to this design – we have a practical limitation to fill the frame.

The smaller the detail, the nearest our subject, the longest the barrel extension, up to a point when the overlap between cylinder misses and the barrel opens. Of course we can increase the 2 cylinders length (assuming that we do not enter other troubles), but in that case we cannot focus the infinity. Otherwise we have to change the design, moving to a 3 cylinders assembly or to adopt a bellow solution.

Now, with the hope not to have bored too much who does macro-photography, who perfectly know this matter, let’s discuss the sketch.

This accompanying scheme is not engraved in stone – it’s suggestions. In fact the lens holder cylinder can have a smaller diameter than the cylinder screwed on the camera body.

This drawing also implies a sliding of the two cylinders (being this a generally easier to implement design, for DIYs), but a thread coupling as found in commercial barrels is surely preferable.

About the hood, its computed length is related to the infinite focusing and to a cylindrical hood.

In the beginning, we skipped the focal length measurement, let’s assume we have it.

In principle the focal length is a independent parameter, we chose it.

In reality we partially chose it, because we do not order a lens from catalogue, but we buy an enlarger lens or we use an available lens in which looks like to be suited to our purpose.

So, we need to measure the focal length.

Instinctively I considered the sun, forgetting the suggestions not to do it I read on intranet:

“why to enter a computation when we have an ideal, powerful source available to focus the light as sharp as possible and to measure that distance?”

Well, after having burned a piece of paper without still knowing the focus (the sun is not vertical, so the set-up would demand some stable holder), I recognized that other guys where right. It’s simpler to use the artificial, vertical light of a lamp. To the right is the setting sketch given in the excel sheet. Focusing is easy, and means to imagine the lamp as sharp as possible on the surface below. The ground-lamp distance is immediate to measure. About the lens-to-ground, the simplest setting is to use one hand to hold the lens while the other one holds the ruler, to be kept as vertical as possible. Then the two measures are entered in the sheet (I guess that for most of us the floor of the kitchen or the table is the first candidate as “reference level”).

It seems we have completed our design. But our goal is the soft-focus, or at least to control it. We all know that closing the diaphragm of a lens (at least to a certain degree), we sharp the image.

We also have a qualitative idea of the sharpness of an image shot by a traditional, multi-elements lens. So we can compare the sharpness of a commercial lens with that of our single element at various apertures.

A single parameter cannot describe completely what we are looking for. For any comparison we should distinguish the “softness” on axis from the “softness” at other points of the image, and we should repeat this exercise at different wavelength. The evaluation is not easy, because is multi-parameter.

So we have to accept a compromise: a single parameter for any “f-number” to define “softness”. Here I chose the diameter of the light spot on the film plane as the most representative single parameter. To clarify, a ideal and diffraction-less lens system would have a pin-spot, while a good, multi-elements lens has a “small” diameter, while a soft lens has a larger one. The trick is how much, so to control the effect and obtain what we like.

Again a parameter fully representative of the “softness” is not univocal, and I refer to the Spot RMS (Root Mean Square), an inverse measure of the sharpness: the larger that number the softer the image.

The diagram shows a comparison between the 250 mm single element and multiple elements lens.

As expected the effect takes off opening more and more the diaphragm.

So, after having taken with a certain aperture, we can decide to increase or decrease the softness degree taking into account the asymmetrical behavior around our starting point. 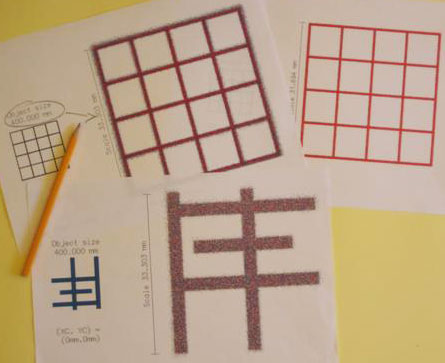 The grids show visually the comparison: the subject is a sharp grid, while the grids depicted are the simulation results in different shooting conditions.

Note that the input grid (i.e. the subject) is 400 mm, while the result of the simulation (that is the image on the film), is about 34 mm long. I have introduced in the simulation a lens-to-subject distance as computed before, to obtain the right magnification factor.

The diagram on the upper left shows the imaging obtained by simulating a grid with a lens f =250 mm lens with fN = 4.0 The image on the upper right shows a triplet with the same characteristics. Note the different sharpness, as expected.

(By the way: the lower print in the figure shows an asymmetrical “cross”, from which we check that the simulation reverses the image).

Now, having selected the aperture, we can see the corresponding radius of the opening.

At this point we may be interested to know another parameter to identify our preferred diaphragm: the depth of field.

Again we specify it as “Spot RMS”:

The value on the X-axis is the distance of the scenario behind the subject plane.

Of course a fast or slow increase of the Spot RMS with distance can be beneficial or not, depending of what we need.

For myself, single lens means portraiture, and I generally like confused background, to attract the attention of the viewer on the subject.

Note: these evaluations have been done by the educational version of “OSLO” software (RD.3). This Company makes freely available in its site also the software handbook ( “User guide”) and an “Oslo” related textbook of optics (“Optical Reference”).

More to come in part 2: Making and testing the lens.

Carlo Ponzini is a resourceful Italian who builds his own UV printer and lenses.