Carlo Ponzoni designs a lens. In the second part of “Monocles lens” he works on assembly and finishing. He also compares the result to other lenses.

This is the second part of Monocles lens if you have missed the first article, read Designing a single element lens first.

Assembling the barrel for the monocle lens

To start we need a lens. This is the simplest point.

I’ve been immediately attracted by magnifying lenses, those lenses we find in every commercial store selling school and office materials. They have a large diameter, are available everywhere, and they are so moderately priced that nobody feels it is a crime to sacrifice them on the altar of the alternative photography attempts.

As mentioned in Designing a single element lens, being interested in portraiture, I selected a 90 mm lens, thinking that for portraits the larger the better. The point is that the larger the diameter is, the longer the focal length will be. So I measured a focal length of about 250 mm, which – for a small format camera – is very long but still acceptable for portraits.

We have the lens. We have computed the barrel length with the monster spreadsheet, and we have to build the barrel.

The bible, “Exploring simple lenses” suggests a set of ideas, from cans of various diameters and materials (card board, plastics, aluminum) to pipes used in house plumbing. In my opinion the most important issue is to select diameters which can be coupled hopefully with a clearance of few millimeters. Then we have to coat them, to make them sliding onto each other.

In my case, as lens holder I chose a card-board can, whose original mission was to enclose Swiss cacao, a poor object but its main virtue was in its internal diameter, matching very well the magnifying lens. Then the problem was to find another cylinder matching this diameter with a small air gap. I used another can, metallic this time, whose external diameter enters the lens holder with some millimeters of “air” in between. Too much.
So here is the point: too loose coupling and the lens holder points toward the ground, and maybe it falls down. Too close the coupling, and focusing becomes painful, and in my experience, the force we need to apply can easily break the camera/barrel interface.

That has been my major trouble in the overall project, because the make-and-test process to wrap and de-wrap tapes and velvet has been primitive, but from my side no better idea until we find light and well coupled cylinders as the e-bible suggest. Or until we decide to have the two parts worked by a thread machinist

The second critical point is the camera/barrel interface. For my “Practika” I need a M42 connection. So I bought an extension ring and fixed it to the barrel bottom. I used epoxy glue reinforced by silicon.

External finishing is important to mitigate the feeling of fragile, unprofessional look of a photographic item based on odd, food related objects.

On the other side, internal finishing is to avoid internal reflections. Painting with opaque black is the first step, but this may be not enough.
Velvet can be a choice, but I’ve I glued inside the smaller cylinder a light trap cutting small “flaps” in a random way on a black paper.

About the aperture, I cut them on black paper, and I inserted them in the holder in front of the lens. This holder can be used for sheet filters.

Now we arrived to the point: what’s the result? What are the differences between a monocle photograph and one shot by a standard, commercial lens?

To evaluate the effect I shot some of photographs with the monocle, at 3 different apertures: fN = 4.0, fN = 5.6, fN 8,0. Despite that the large front lens is a fN = 2,8, I avoid to work with such wide aperture because in my opinion the soft effect ends in a confused, disturbing vision. 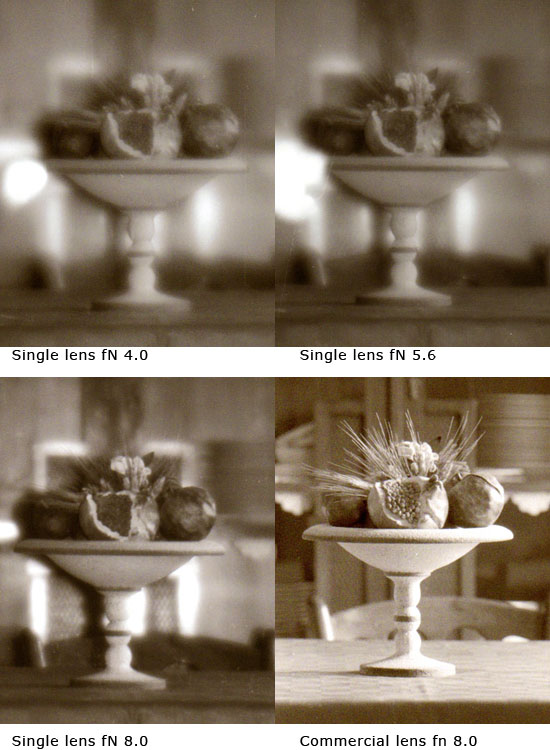 The effect should be quit clear in the above still-life shots. Details improve from fN 4.0 to fN 5.6, and again to fN 8,0. From the simulations in Part 1 I expected a steep decrease in the image softness moving from fN 4 to fN 5.6, and a less noticeable effect from fN 5.6 to 8,0. In my visual perception the opposite happens: the increase in definition seems more evident moving from 5,6 to fN 8,0.

The larger difference is when we compare these shots with the conventional ones, taken by a commercial lens. Assuming the fN 8 condition, we can now see a completely different effect (image above).

The subjects in background where fuzzy in the single lens shots and can be identified only now, but the result is (probably) much less pictorial.

Let’s move to portraits, or the target of this investigation. 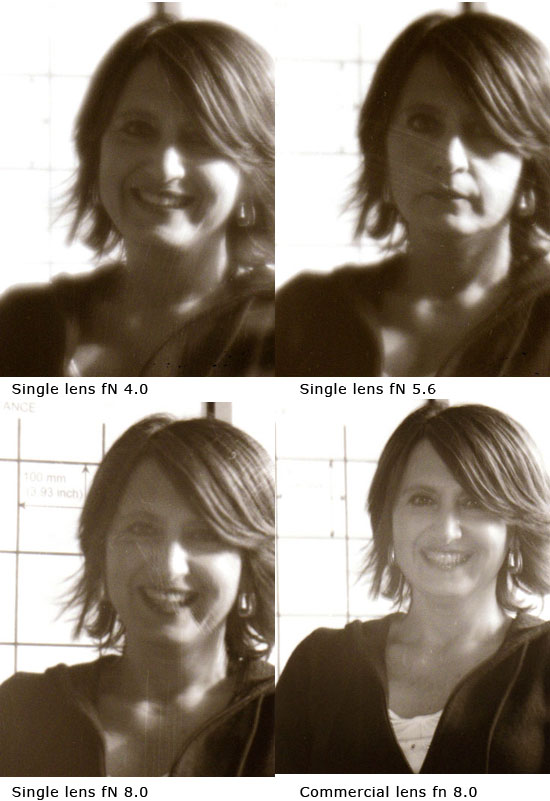 Again the feeling is similar to the still life sequence: details are more “sharp” at higher f-numbers, the background is appearing, and again the commercial lens result can be recognised. The squares edges printed some 30-40 cm behind the model, are 10 cm long, as in the grid used in the optical simulation shown in Part 1. (about the photographs, please forgive the scratches: they are a consequence of a bad film loading in the development tank).

So, what can we think about? We stop here our investigations in this primitive photography and we stick to a traditional, multi-element, elegant, strong, professional, lens?

What if changing format?

At this point we can investigate (at least by simulation) what would happen changing the film format. We talked about small format, so we can now switch to the medium format.
Let’s fix the aperture, for example fN = 4.0.

We are using the same lent, the same object, so we just have to move the camera in a nearest position (we have to fill a larger frame with the same subject) , and we have to refocus. We do this virtually, thank to the simulator.

Let us check what happens, here.

We see how the borders of the image suffer a much larger softening and some distortions.

This can be easily seen looking at the ray tracing: with larger format, external rays becomes less and less paraxial, suffering aberration, as the figure below depicts:

I thank Anna, the smiling lady appearing in the images, for supporting my experiments by posing and accepting to have her portraits published.

Carlo Ponzini is a resourceful Italian who builds his own UV printer and lenses.

Film, Darkrooms, and Analog: My Open Questions to Academia

How simple can a camera be?