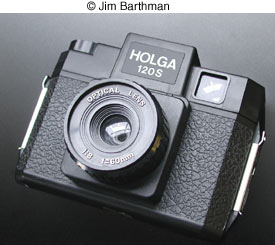 The Holga is a cheaply-made medium format plastic camera. There is some disagreement as to whether this camera, made in China, was originally designed as a toy or simply a very inexpensive plastic camera, but most people call it a toy, The Holga is famous for its uncontrollable light leaks, soft images and vignetting, but artists and pro photographers alike love the Holga aesthetic. The Holga makes magic.

A Holga can be purchased for a mere $15 to $20. It uses 120 medium format color or black-and-white film. There are two models – the 120S, which has a hot shoe as a flash option and the 120SF with flash. All the photos on this page were shot with the Holga 120S; some were shot in the smaller format, some in the 6 x 6 format – more on that later. 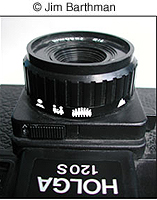 The Holga’s shutter speed is about 1/100th of a second and it has two aperture settings, one for full sun and one for cloudy days, so your choice is either f/8 or f/11. The camera has four focus settings, but you can also set your own focus somewhere in between these four. These icons are on the lens barrel. 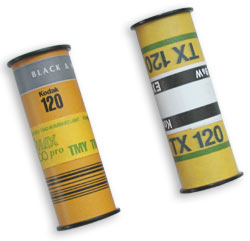 The color shots from the Mermaid Parade were taken with Fujicolor Reala 100 and Fujicolor NPH 400 and the black and white with Agfapan APX 100. BUT this was a very, very bright sunny day at the beach. Ordinarily, I would recommend using a 400-speed film. Play around with different film stocks and find the ones you like best. If you want to shoot in low light, you can try Fujicolor NHG II 800 or Ilford Delta 3200. You can also use infrared film in the Holga, tape a red #25 filter over the lens. Or you can try your luck with slide film.

First, decide if you would like to shoot using the 6 x 4.5cm format or the 6 x 6 format. If you choose the 6 x 4.5cm format, you’re ready to load the camera. For 6 x 6, you need to modify the camera a bit. Here’s how to do it – slide the metal clips down and remove the camera back. Look inside the camera and you will see a square plastic insert. Remove it. It pops out easily. Save it because you may decide you want to put it back in later. There are now several holes visible inside the camera. Put small pieces of black tape over these holes. Get a small regular screwdriver. You need to move the arrow on the camera back from 16 to 12. (You get 16 shots with the 6 x 4.5cm format, 12 shots with the 6 x 6). Push the arrow from 16 to 12 with the screwdriver, being very careful not to damage the red window. Now you’re ready to load your film.

Note: When using the 6 x 6 format, without the frame inside the camera, there is little left to hold the film in place as it advances, and more chance of loosely wound film. You can carefully jam small pieces of cardboard in under the bottom of the film spools to lessen the problem. With the 6 x 6 format, you will also get more vignetting. If that bothers you, you can crop as we did with some of the photos here.

Note: It’s always best to load and unload your camera in subdued light. 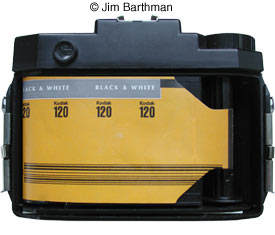 The empty take-up reel should be on the right side. Place your new spool of film in the left side, pull the beginning of the film over and insert the edge into the take-up reel on the right. Keep your finger on the spool and wind the film a bit. Replace the camera back, put the metal clips back in and wind the film. You will see dots and arrows and then a number 1. It’s a good idea to place a piece of black tape over the red window to minimize light leaks. Make it like a little tab you just lift up when you’re ready to rewind your film. Then push it back down. Keep the foil and the box the film came in.

When your roll is finished, advance the film until the film is completely wound on the take-up spool. You can usually feel when it’s done. Take off the metal clips, remove the back and take out your exposed film. Remember that this is best done in low light. Fold back the leader and lick the paper to seal it. You now have to put the empty spool on the right side and you’re ready to load a new roll of film. If the paper backing and film does not appear to be tightly wound around the spool, pull it tight and wind up any remainder. Put your exposed film back in the foil and box that you saved and then tape the box shut to protect your film.

Using Black Tape to Tape Up the Camera 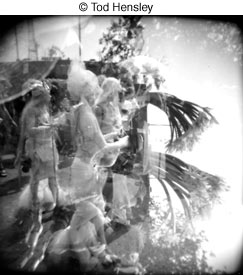 The metal clips that hold the camera back on are apt to slip and fall off and if that happens, the camera might come apart and ruin your film. You can try bending the clips so they hold better or you can tape them on. If you want to minimize light leaks, put strips of black tape wherever the camera parts meet. Take a look at the camera and you’ll see where light leaks might occur. It’s up to you whether you want to tape or not. Taping doesn’t guarantee there won’t be any light leaks, but it can help minimize them.

It’s a good idea to take several loaded Holgas with you when you’re shooting an event like the Mermaid Parade – especially if you tape up your camera. Personally, I like some light leaks so I tape up parts of the camera and leave some places untaped. When taking these photos, Tod didn’t use any tape at all, allowing the light leaks to occur naturally. With no tape to remove, he actually reloaded his 2 cameras five times during the parade and I was stuck with my two pre-loaded rolls of film, not wanting to miss any of the parade while removing the tape from my camera! Lesson learned – different occasions require different tactics!

A word of advice on tape, get the kind that’s not too sticky or you’ll have a giant mess on your hands. Black gaffer’s tape works well. After you shoot your first roll, you’ll find where the light leaks are coming from and what you like and don’t like. It’s all up to you so your pics are as individual as your Holga.

Note: About that lens cap, I tossed mine immediately. It’s easy to forget to remove it and your camera’s plastic lens isn’t exactly that new Tamron you just purchased.

Shooting photographs with the Holga 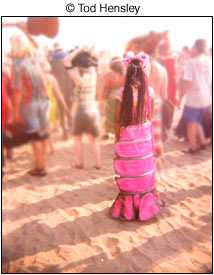 Remember when shooting with a Holga that you may lose a bit on the edges of the film, this is the classic vignetting effect. I like to fill the frame and whatever falls off, so be it. You’ll see what you like after your first roll. You may want to manipulate your images later in a program like Photoshop. In the photo of the mermaid on the beach, Tod blurred the background to achieve selective focus on the mermaid’s pink dress and the wonderful shadows on the beach. I made a blurred version of the pic of the little girl blowing bubbles but decided I like the original photo better.

For normal shots, advance the film after each shot, but you can also expose the film several times and get intentional multiple image shots like these. Forgetting to advance the film, once, or even twice, can sometimes result in incredible unintentional multiple images. The soft-focus can add a dreamy quality to your shots like in the ferris wheel photo. You may unintentionally get a 3D effect as in this double image shot. Sometimes loosely wound film can have interesting effects too – bits and pieces of one frame can end up in the next frame and even combine to form a sort of fake panorama shot. It’s all magic! If you experiment with panoramas, you can ask a custom lab to process the film but not cut it. That way you can decide how to crop your images.

Once you’re familiar with your Holga – everyone is different and comes with its own quirks – you will know how to fix it up so it works best for you. Google up a search on the Net to see what modifications people have made to their Holgas. Even if you can’t make it out to Coney Island, try capturing some mermaids where you live – remember, shooting with a Holga is fun.

Where to Buy a Holga: www.holga.net

Reprinted with kind permission from the New York Institute of Photography web site (which no longer exists). If you are interested in cameras and lenses, also check out the book Exploring Simple Lenses.