Anthony Mournian of the Photographers’ Formulary tells the story of Malin Fabbri: Founder of AlternativePhotography.com. 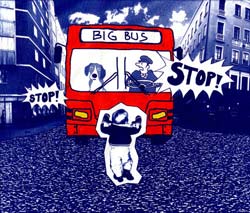 Cyanotype is one of the oldest photographic processes. It has much in common with the blueprint process used for many years in the architectural field. But while construction blueprints have been disappearing, replaced by computer generated sets of plans, Cyanotypes have come into their own as a rejuvenated Alternative Photographic Process.

This revitalization is in no small part due to the efforts of Malin Fabbri and her website, AlternativePhotography.com. As the tsunami of digital images threatens to sweep conventional photography away, Malin, like Bud and Lynn Wilson of the Photographers’ Formulary, is intent on preserving and promoting the earliest and oldest photographic processes.

The Photographers’ Formulary is pleased to recognize in this article Malin’s efforts, and her huge investment of time and energy in promoting the Alternative Photographic processes.

Malin began taking photographs as a child. During a visit to her grandmother’s home, Malin pestered her grandmother with at least a million questions. After a while the grandmother grew tired of the incessant inquiries. She brought out an ancient camera (by today’s standards,) loaded it with film and sent Malin outside to take pictures. Then only eight years old, Malin took very little time to shoot up the roll, taking photographs of flowers, benches, and anything that came into the view finder. Remarkably, she still has those pictures.

The interest in photography stayed with her as she went on to take a degree in Graphic Design, and eventually to go for her Masters at Central St. Martin’s School of Design in London. That was in 1998, and in the infant days of the internet. (How quickly we forget it’s been only since 1993 that Mozilla and Netscape came on the scene with a graphical interface, making it possible for all of us to surf the Web!)

As a graphic designer for Time magazine and CNBC Europe, Malin was always on the lookout for innovative designs and images with a fresh look and feel. Wondering what was out there, and how it might be being used by other graphic designers, Malin created a questionnaire as part of her Master’s thesis. She was curious about the availability of cyanotypes, and if they were available, were they being used.

The internet proved a fertile source of information. While there were few books available on the subject, she found a number of photographers who were making Cyanotypes. They were helpful, and seemed delighted to find someone who shared their interest in a process as old as photography itself. In time, she developed her theory that cyanotypes, while not widely known or easily available, would be accepted by the general public if used in advertising. The problem, however, was akin to the old saw, “Which came first, the chicken or the egg?” Without access to cyanotypes, graphic designers would not use them. Without interest in cyanotypes as a design element, there would be no cyanotypes available for use in design. No photographic libraries stocked them, and designers depended on the stock photography libraries for their images.

Malin eventually finished her thesis. You can read it here. As a result of her research into cyanotypes, she bought the internet address, Cyanotypes.com and published her thesis on her new site. To her surprise, other photographers working in cyanotype asked if they might post some of their images on Cyanotypes.com. In a short time the site had over fifty artists. That was in 2000. 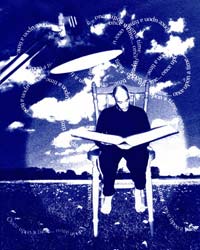 So many artists inquired about publishing their work on the site that Malin later changed the name to AlternativePhotography.com, the name it has today.

Malin opened up the site to all alternative processes, and now enjoys more than 30,000 visitors each month. The site provides artist’s galleries for a small charge, accepts papers for publication on the various processes, and hosts discussion groups for like minded Alt-Processors.

The site was never intended as a moneymaker, and it has lived up to expectations. Malin spends many hours each month maintaining the site, and also publishes a short newsletter to point out the latest books and articles.

All of this is in addition to taking care of her young son, Maximillian. Max was born a little over a year ago and is up and running. Keeping up with him is a challenge, and moving things up higher and higher to keep them out of reach is an unending task.

Malin and her husband, Gary Fabbri, co-authored Blueprint to Cyanotypes. Take a look at Malin’s site, and read the review of a clearly written and well illustrated guide to the cyanotype process.

Learn more in the Cyanotype book