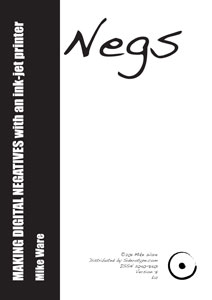 Buy the collection of Mike Ware’s digital downloads on Siderotype.com for 6 USD.

The ‘collection’ is all the downloads together – that means five files: Making Digital Negatives, the 100 step test negative (.tif file), Siderotype Report 1, Siderotype Quarterly 1, and the short (1.5 minute) Quicktime film Coating Paper with a Glass Rod with Mike Ware.

A 20-page downloadable workflow on how to make negatives. Excellent value.

Over the past four years Mike Ware has been experimenting with digital negatives and has now released Making Digital Negatives, a 20-page downloadable workflow that presents the subject in a step-by-step manner suitable for both beginners and advanced practicioners. Dr. Ware’s method is designed to work with a wide range of printers, requires no additional software beyond Photoshop (or similar) and includes a high resolution 100-step test negative.

Mike Ware, found it necessary to develop his own way of making negatives. He stayed clear of the commonly used curves and applies the levels control instead. Not happy with an ordinary 21 step wedge, Mike also created his own 100-step table to assess his negatives.

As always with Mike’s texts, it is written in a clear and methodical way. The text can be used by photographers new to both digital negatives and Photoshop, as well as advanced users and Photoshop pros wanting a shortcut to making good negatives.

Starting with calibration, the text then moves on to working with the digital file, making a perfect positive, adjusting it to a negative and printing it onto transparency film. The appendices also describes the technical aspects in more detail.

I look forward to testing this new, seemingly simpler approach to digi negs in my next print session.

“An excellent analysis of the digital negative process for alternative processes. It helps to make a really difficult subject comprehensible and usable.”