The myth: A pinhole camera cannot be used to make cyanotypes! Malin Fabbri confirms the myth and makes pinhole cyanotype. 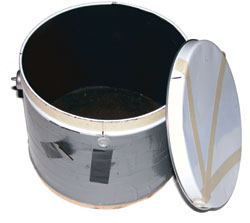 It has been said that the exposure times for a pinhole camera are just too long to make a cyanotype print. True or false?

For testing this theory we used a bucket pinhole camera with f/295 hole and exposure time of around 1-5 minutes when using ordinary black & white silver gelatin paper – depending of course on the strength of the light. Where the black & white paper would normally sit, a coated cyanotype paper was inserted, and the camera aimed at the garden.

Exposing the paper for 8 hours – a very long exposure time by any standards – did not result in the slightest imprint on the paper. Not a shadow.

A fresh paper was inserted. This time the exposure time was weeks instead of hours. Five weeks to be exact – in the Scandinavian summertime, when the sun shines for most of the day and most of the night. This resulted in some unimpressive streaks on the paper.

Not being disheartened, another paper was inserted, and exposed for six months. For half a year the pinhole was sitting there, letting in light through its little hole, exposing the paper. The result? After the rinse, a slight blue patch showed in one corner, but certainly nothing worth the effort. See above right.

True or false? The conclusion: True! To combine pinhole and cyanotype, the in-camera method cannot be used. Instead, make a negative using the pinhole camera, and use the negative to print a cyanotype.

After the article was published a few readers came forward with their experiences. Thank you. Here is Sarah Warwick’s experiment.

Learn more in the Cyanotype book

All you need to get started with cyanotypes, full of information, tips and samples from artists.
An excellent beginners’ guide to cyanotypes!

Will Dunniway: A man with a mission