Lena Källberg is in constant search of new pinhole cameras and explores different ways of capturing images and experiments with pinhole photography.

Lena Källberg. A petite woman who does not seek attention, but yet, at every exhibition she holds still has a crowd of curious people around her. She has had two recent exhibits in Stockholm, Sweden. At both Lena set up a table and sat herself down and started building cameras. The crowd watches and Lena teaches. By the time the visitors left, they have sampled a collection of Lena’s cameras, picked up a drawing on how to make a Seymore 135 pinhole camera, and has become curious enough to go home and start making one. In true community spirit, she has converted several digiheads to pinheads. Way to go Lena! 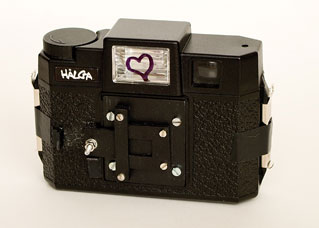 Pinholing is Lena’s passion. But I also believe teaching is. Sure, she is happy talking about her work and selling it, but there is more to it. At the huge space at Delight Studios, Lena and the gallerist Guide Hildebrand sealed off one of the rooms, put up thick black curtains, made a tiny hole in it, and build a huge Camera Obscura. I stood inside the Camera Obscura for a long time, watching the upside down and back to front landscape outside. The most interesting thing about standing there, was watching the faces change of the people walking in. The realization of where they were, and the insight of how a pinhole camera works struck, and their faces changed to mirror the curiosity of a child who is learning.

Harriet, Lena’s 7 year old niece nailed it on the head:

“So, you mean we’re inside the camera? But, dad, can you hold me upside down so I can see what it looks like for real!”

Her dad obliged and Harriet was happily dangling upside down watching the landscape outside.

During April and May Lena held another joint exhibition at Galleri Ikon, with Stéphane Chabier, Iwo Myrin, Svante Warping and Peter Wiklund. She acts as the spider in the web, contacting the gallerist, and inviting other pinhole artists to participate.

Lena’s anamorphic pinhole camera was made from a cookie jar. It has two holes and a tripod holder underneath. See “The Bell Tolls” (image below). 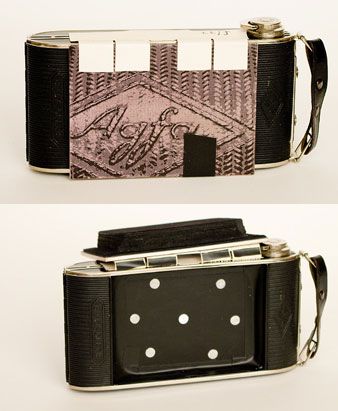 She is working towards being a fulltime pinhole artist, but since pinhole photography is such a narrow field, she supports herself running her own design bureau as well. She shares the studio space with several professional photographers, and has the luxury of her own fully equipped darkroom.

Lena has the eye of an artist but is also a technician, a curious experimenter and a perfectionist. We spent a day at her studio building multi pinhole cameras, and by the time I had built two, with three holes in each, she was still measuring, piercing and sanding down her first pinhole. Measuring again, starting over, measuring and sanding. Angles were carefully measured to achieve the perfect multi pinhole camera. When Lena builds a pinhole camera nothing is left to chance, though she claims that chance and the unexpected is what is interesting with pinhole cameras. She is in constant search of a new pinhole camera, but not the ultimate one, if she does, her search will be over. She says:

“Two cameras are never the same, they have their own personality. The goal is not to find the ultimate camera, it is the explorative path of seeing how a camera works”.