Robert Schaefer interviews Malin Fabbri, recently after the publication of the beginners guide to cyanotypes: Blueprint to Cyanotypes. 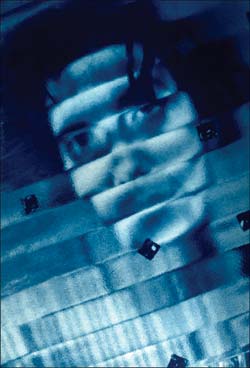 After years of printing gelatin silver prints, I took a workshop in cyanotype printing, which is a process discovered by Sir John Herschel in England in 1842. Before this process, photographers had made daguerreotypes, which involves coating silver plated copper with a very toxic gas rendering them light-sensitive.

In 2000 I received an Email from Malin Hylén , who was writing a paper on the 19th Century printing process cyanotype as a thesis for her MA Degree in Design Studies from Central St. Martin’s School of Design in London, England.  At that time I had been printing with the cyanotype process for over fifteen years, and Malin wanted to know just how I used this 19th Century process and why.  I sent her my answers about a month before I left for Houston, TX and Fotofest which I was attending for the first time.  I remember that very few people had cyanotypes; however, I did meet a few photographers using it – Jan Van Leeuwen from the Netherlands and Mark Sink from Denver, Colorado.  A copy of Malin’s paper arrived soon after my return from Houston, and I found out that the other two photographers using the cyanotype process were also in her paper.  Later Malin created a website – cyanotype.com – which exhibited only cyanotype work, then she decided to open it up to other 19th Century processes and gave it the current name of AlternativePhotography.com. Malin and her husband Gary Fabbri have now published a book about the cyanotype process: Blueprint to Cyanotype – Exploring a Historical Alternative Photographic Process, and I interviewed Malin about the book.

Image above: Cyanotype called "Miss Julie" by Robert A. Schaefer Jr. which also appears in the book Blueprint to Cyanotypes. 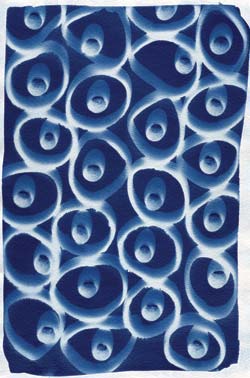 Robert Schaefer: How did you get into photography?

Malin Fabbri: I was 8 years old and visiting my grandmother. She had started cooking Sunday dinner for the whole family and I stood at her feet asking a thousand questions. She looked at me, smiled and told me to follow her into the sitting room. She dusted off an old camera that had been sitting on a shelf, she loaded it up with film and sent me outside. I quickly shot off my first roll of film around the garden. I still have those photographs. The interest in photography stayed with me, and although it never became my profession it has been a very useful asset to me in my work as a designer.

Image right: Cyanotype called "Eyescreen", a photogram by Elizabeth Graves which also appears in the book Blueprint to Cyanotypes.

RS: Why did you become interested in cyanotypes, which are made with a processes invented in the 19th Century?

MF: When I started printing cyanotypes, digital photography was in it’s infancy, most people still couldn’t afford a digital camera, so large negatives had to be produced in the darkroom. Now, when everyone has a digital camera it’s a different story.

The idea of combining one of the first photographic processes with one of the latest is very appealing to me.

I stumbled upon cyanotypes when I was working at Time Magazine Europe as a designer. I was looking for an image with a different look and feel than the standard library shots, and the hand coated quality of cyanotypes caught my eye. In the end I didn’t use cyanotypes in the magazine, but the coincidence led to a Master’s thesis in "alternative photography." I started a website, "Cyanotypes.com," which evolved into "AlternativePhotogrpahy.com", and that’s where we are today – the site is packed with practical information and over 200 artists have galleries on the site. 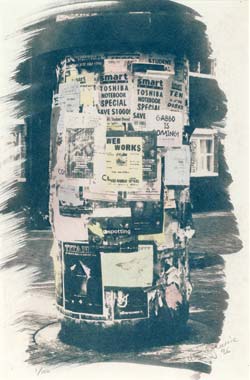 RS: Why did you select the cyanotype process for your book when there are many other processes, which were invented around the same time?

The cyanotype process is a great way for digital artists to get their hands dirty.

It is very versatile. Some people print on t-shirts and others make high quality fine art prints.

Image right: Cyanotype called "What’s On" by Wendy Currie which also appears in the book Blueprint to Cyanotypes.

RS: Do you ever make cyanotypes yourself?

MF: Yes, of course. I am privileged to have my own space where I print and I also run workshops and I have a exhibition currently running at a museum in Sweden. Our new book, "Blueprint to Cyanotypes" is very much based on personal experience and results from printing tests. Many people ask this though, since I don’t have a gallery myself on AlternativePhotography.com. The reason for this is that I don’t want to see the website as a means for self-promotion, but an information centre on historical processes in use today. 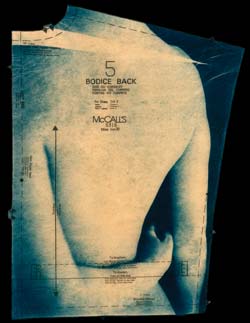 RS: Where do you see the website going in the future?

MF: When I started Cyanotypes.com, the initial website, the use of the internet was very much in it’s infancy. That’s only 7 years ago. Then people just started getting used to emailing. Now people order airline tickets, do their banking and socialize on the internet. Who knows what the future will hold, but one thing is for certain, and that is that it will be a prime source of information, and as our site AlternativePhotography.com supplies just this, information on alternative processes, it will be around for a very long time.

As far as historical processes are concerned, I believe there is always a backlash. As digital becomes more and more popular, a number of photographers will look for different paths to express their creativity, and 19th century processes is one of these paths.

Image right: Cyanotype called "Bodice Back" by Francis Baker which also appears in the book Blueprint to Cyanotypes.

RS: Are you going to produce more books?  How can one acquire Blueprint to Cyanotype?

MF: Yes, more books are planned. The next one is of the Art and Artists of alternative processes. It will be a book of inspiration. Artists with galleries on the website will show their work, and a wide range of processes will be shown. Hopefully a great source of inspiration to others. Our book Blueprint to cyanotypes can be bought here on the website.

Robert is a New York based photographer working in the Cyanotype and other alt processes and an active contribtor of photograhic articles. Robert A. Schaefer Jr. was one of the first photographers to have images on the website of AlternativePhotography.com (then cyanotypes.com).  He has printed images with the cyanotype process for over fifteen years and uses other 19th Century processes such as platinum, palladium and Van Dyke.  One of his cyanotypes was published in the book Photography’s Antiquarian Avant-garde by Lyle Rexer in 2002. Another of his cyanotypes is found in Blueprint to Cyanotypes. See Roberts website on schaeferphoto.com.

A lot more information on the process, chemicals, coating, exposure, printing, making negatives, washing and troubleshooting is available in this book.

Lith printing in the digital age