One of the first thoughts I had while viewing and reading Edward Levinson’s new book Timescapes Japan – A Pinhole Journey, was how much my own photography has been influenced by him. The influence isn’t so much in the images themselves as it is in Ed’s approach to pinhole photography. Whether it is the influence of Japanese culture or perhaps Ed’s personal nature, his approach to his work is thoughtful and meditative. And his photographs of the last several years reflect those qualities of his style. This approach is also apparent in his sparse, but eloquent writing that accompanies the book.

Gregg: You’ve lived in Japan for many years now. In what ways has your life in Japan shaped your work and what influences do you feel carry over from your life before moving to Japan?

Edward: Coming to Japan in 1979 was in a way a new step forward in my personal growth journey. At the time I was interested in many spiritual traditions as well as working on my own inner spiritual attunement. In a practical sense, I had been working as a landscape gardener in the US. So a visit to see real Japanese gardens was also an impetus to my trip. I actually worked as a Japanese gardener for my first three years in the country. I was deeply involved with nature and the culture. At the same time I was able to try Zen meditation and visit many Shinto Shrines and other sacred places around the country. I am sure those early years in Japan had a big influence on what I would photograph later. In fact I didn’t really begin to take photos seriously here until 1984 after I had been here 5 years! By that time, as a visual person I had obviously absorbed a lot of images in my “mind” both consciously and subconsciously. I suppose my photo work would have a similar flavor to it even if I hadn’t come to Japan, but not the Japanese cultural element.

Many photographers have visited Japan and later produced books.

I would like to think my book offers something a little different since I have lived in Japan and been immersed in the country for 27 years.

Gregg: Has the experience of preparing this book caused you to re-examine or take a fresh look at your work, or at your life in Japan?

Edward: That is an interesting question. In selecting the images for the book, one thing I noticed is that it was often the earlier images that seemed the freshest or at least seemed to have the most impact. I think often it is the first images in a series that are most memorable. So though I wanted to include “new” images in the book, they seem to be in the minority. When I first showed my Sacred Japan series in Japan, many Japanese serious amateur photographers commented that they wanted to make these kind of images but couldn’t. I remember when my Cityscapes series debuted in a show in Tokyo and also on the Pinhole Visions website. At that time it was kind of new to do so-called street photography with a pinhole camera on a tripod. To me it seemed very natural. Now that style has become very popular. On seeing the book many Japanese have said that I seem to see or know Japan better than they themselves. But even though I have been here half of my life, my view is still filtered through the my heart so to speak. I hope my “vision” is not limited to just Japan. Interestingly, my Healing Landscapes are generally more popular in the West than the Sacred Japan series which I thought Westerners would like. Landscapes have a universal appeal that transcends cultures and countries.

There are many images that didn’t get into the book so I hope there will another in the future. I haven’t added so many new images to these series recently. I don’t want to say “been there, done that,” I have just been stepping back a bit and trying to see how to continue the series without getting repetitive. In the meantime I have produced a new series of work that was done in my studio with pinhole cameras, natural light, a screen, and lots of playful shadows. It is very different and seems to fit where I am in my life right now. 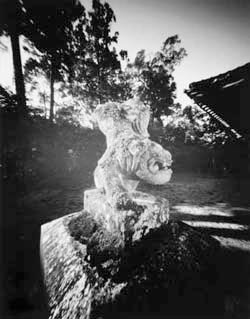 Gregg: How would you compare your memories and thoughts of some of the places you have photographed to the images you have captured through your pinhole cameras.

Edward: Every photo I take has a story or memory behind it. I may forget what the exposure was or the name of the place even, but I remember being there in that moment. As most people know, pinhole photography can be unpredictable at times. But if you shot the same type of scenes often enough you begin to know what to expect. I may shoot 5 or 6 negatives in a row at the beach on a day when the waves, clouds, and light are looking good. Most of the time there will be one that is special. With the sea it is hard to tell which one will be the best while shooting. Occasionally none of the images turn out interesting, but I have had fun anyway.

Photographing in the city, I can’t control the flow of people any better than I can control the flow of the waves in the sea. But I usually can tell when I have gotten the image I want by how long the people in the scenes happened to stand still. There are times whether in nature, at a sacred place, or the city where you just know in your gut that you got a great image. It is so exciting to have that moment first while shooting then again when I see the developed negative for the first time.

I usually “find” my images by being ready and open to what is happening. Many times at the coast near where I live when the scene looks beautiful, I literally run to the water’s edge because I don’t want to miss it. Most of the time shooting in the city I walk around with the camera on the tripod and am ready to photograph in a moment even on the bus or train. Photographers often use the word “collaboration” especially when doing portraits or working with models. I consider all my images to be collaborations between myself and the elements that surround me.

Gregg: Do you feel you have been successful in capturing these moments or were there moments that escaped?

Edward: If I was to put a percentage on it I would say maybe 75% captured and 25% escaped! 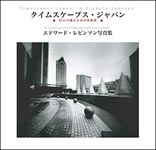 A beautiful artbook with award-winning photographs.