A history Wetplate collodion process and the different products produced: Ambrotypes, Ferrotypes and the Negative process.

Fox-Talbot’s Calotype process was the first successful negative-positive process, using a paper negative in contact with salted paper to make a positive print. Although this method had the undoubted advantage that a single negative could be used to produce multiple prints, it could not rival the Daguerreotype for sharpness and clarity. Because the problem was caused by the uneven fibrous texture of the paper negative, the potential for glass to provide a superior negative support was quickly recognised and during the 1840s a number of attempts were made to coat glass with a photosensitive surface. In 1851 Frederick Scott Archer published details of the wet collodion process, this produced a grainless glass negative capable of making beautifully sharp prints, on salt or albumen paper, and it dominated photography for the next thirty years, that is until the introduction of the dry plate in the 1880s. 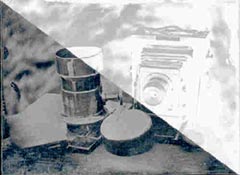 Very early on Scott Archer noticed that if an under exposed negative was held against a dark background it appeared as a positive image, and indeed that is all that an ambrotype is – an under exposed negative, on glass, the dark background being provided by black varnish, paper or velvet. This had two great advantages over the Daguerreotype. It was much cheaper to produce and if viewed through the back of the glass the subject was seen the right way around and not laterally reversed like the Daguerreotype. The positive process also had the further advantage that it could be carried out quickly, so that the customer could receive the finished photograph in just a few minutes.

During the 1850s an ingenious American conceived the idea that rather than using a black backed glass plate as a support for a positive image, by substituting instead a thin shiny black lacquered iron sheet as a support, an even cheaper and much more robust product could be produced. This became known as the Ferrotype, from one of the early trade names. Like the ambrotype, the positive image was produced by making an under exposed negative on a shiny black background. The slang name Tintype was often used for the Ferrotype.

Ferrotypes and Ambrotypes both are, like Daguerrotypes, one off processes and the Ferrotype shares the Daguerrotype’s lateral reversal or mirror image effect. Despite this drawback the Ferrotype’s victory over the ambroype was complete by the middle 1860s and the ambrotype quickly followed the Daguerrotype into oblivion. There are several reasons for this, apart from the cheapness of the product. The Ferrotype, because it is only a very thin piece of steel sheet was easily mounted in albums unlike the glass ambrotype, also for the same reason it could be slipped into an envelope and posted quite safely.

Sean Mackenna is an experienced ‘Wethead’.