Herbalism is botany applied to medicine. It comprises the extractive use of medicinal plants or their derivatives for therapeutic purposes, often for the prevention or treatment of pathologies. Herbalism holds a strong presence in traditional cultures of Mexican medicine.

The outright objective of my residency project was to formulate B&W motion picture film developers based on Mexican plants used in traditional medicine, attempt to standardize their preparation method, and to process film with them. One way to contribute to the long term sustainability of home-processing of film is to further extant research into safer and simpler non-commercial developer processes.

Plant-based developers have been used for many years. The base developing formula used was Caffenol CM. Caffenol is currently the most famous and frequently used eco-friendly developer.

“The idea of formulating a developer based on Yerba Mate [Ilex Paraguaiensis], a typical drink where I am originally from in South American, came to me via an article about Phil Hoffman’s Film Farm. The developer not only worked perfectly, but was also economical, could be reused, and is “eco-friendly”.”

Upon invitation by LEC to be part of the LEC-CHURUBUSCO residencies, I was immediately struck by the idea to use plants, specifically, those used in the traditional medicine of the original people, to achieve the formulation of a 100% Mexican photographic developer.

The project included close and fundamental collaboration with the chemistry team at the laboratories of Churubusco Studios, achieving an interchange between science, experimentation, and art, to achieve the results outlined below. We tested these developers for stability, pH and range, and resulting density, to evaluate their effectiveness. In general, all developers have pH above 10, a level which denotes an ‘energetic’ developer.

Preparation of an herbal developer

Most plants contain the famous tannins that by hydrolysis it form an acid and a base. In general, this acid is in the phenolic group. It can reduce the silver present in photographic film so that it is feasible to formulate a developer from them.

The differences across the results of these three methods were imperceptible, so it was decided to steep the plants in hot water for a day, as that was the easiest method to carry out.

The method is simple. The dry leaf of the plant is placed in a glass or plastic jar that can tolerate hot water. Add 650 ml of boiling water, and leave for one day. Then, filter the liquid ( with a paper or cloth filter) to remove the rough tea and plant leaves, sticks, etc. The resulting amount of liquid might be around 500 ml.

The tea-infusion can be placed in the refrigerator for use in the following days, or you can even freeze the liquid for use in later months if you are using season flowers.

For each 100 ml of resulting tea/infusion, add 8 grams of sodium carbonate and 2 grams of ascorbic acid. Some leaves absorb more water than others, so the resulting liquid may be less than 500 ml. In these cases, add boiling water to top-up to the 500 ml mark.

Recipes for herbal and plant developers

All tests used Kodak 5302, Kodak 3378, and ORWO UP21, processed as a negative. The resulting chemical fog is tolerable if the negative is transferred via telecine or scanning. If using the negative for contact printing it is recommended to employ the potassium bromide option suggested, above.

These formulas employed a standard developer time of 12 minutes at 26ºC for all films tested in the first use, the good thing is that it could be reused. If using another film stock, development times can be obtained through comparison with other developers or through some tests.

Herbalist developers verify the power of traditional plants, demonstrating the rich cultural heritage of the original peoples of what is now Mexico.

Below, is a study of the gamma and density curves of a test strip developed with Hibiscus tea, as well as the evolution of tests with “Té del Indio.” Compared to a standard cinematographic laboratory curve, these test results demonstrate strikingly similar tonal ranges and density. Hibiscus tea results do demonstrate a greater chemical fog, which is evident in the lower region of the curve. 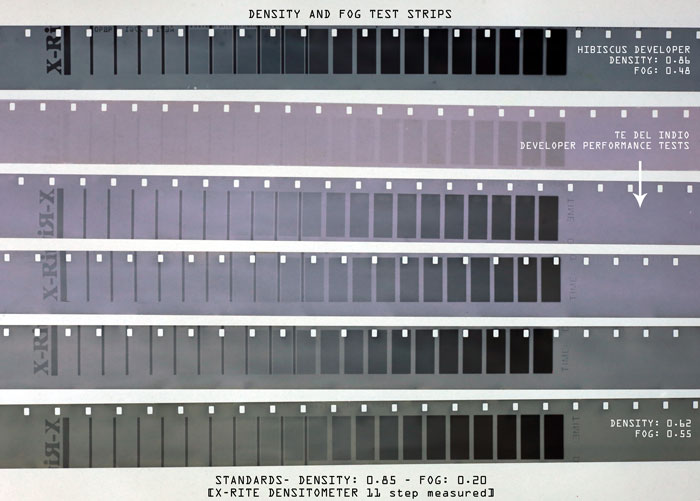 This project was generously supported by the chemistry team and developing technicians at the laboratories of Churubusco. It is one of the LEC [Experimental Film Lab, Mexico] and Churubusco Studios and Film Labs residency program 2018.

General Treegan, born Andrés Pardo, is a film editor, producer, experimental and documentary filmmaker, photo lab nerd and lover of small formats based in Mexico since 2003. He loves black and white, home processing and his Russian camera collection.