I received an email from a college photography student who had discovered the infrared graveyard images on my website. She was inspired by the images and wanted to use them as a basis for a project she was preparing for. I must say I was honored that someone would see my work as an inspiration to them.

I remebered having found many others’ work as inspiration to me. I believe that with time the combination of inspirations evolves into personal style.

The student asked why and how I used infrared film, and how I created images with such a spiritual point of view. I mentioned that…

“… although I am a lover of Stephen King novels, Simon Marsden, ghost stories, horror movies and TV shows, superstitions, gargoyles, psychics, and the supernatural, I do not necessarily believe in it all.”

I do believe spirituality is within each person to discover on their own. For me it is the visual creative process.

Infrared film caught my attention before I thought of using it to photograph in graveyards. I needed to create a new body of personal work and craved technical and visual challenge. I chose black and white infrared film to see what I could see and also because it is completely opposite of what I am used to.

The mysterious effects achieved with infrared film opened a new visual world. This naturally called up my interest in graveyards, psychics, and history of the town I live in. After doing research, such as who else photographs graveyards and why, I learned much about graveyard etiquette, symbols, and the varieties of stone used to craft markers.

While researching I also came across epitaphs. This was the most important work I did because epitaphs became a spiritual connection to who the grave-folk were when they were alive. People wrote or used other epitaphs about how they felt about leaving this world. Actually I am amazed that most people were so optimistic. They had come to terms with their mortality and their spirit had risen. Some epitaphs expressed the sorrow of losing a loved one accepting that their spirit will live on, while others are quite funny.

After finding an understanding about graveyards and grave-folk I felt more inspired than ever to photograph them. I mapped out the graveyards in my county. I try to find interesting and unusual compositions of older stones, gates, urns, etc. I note light during different times of day for specific shots. I am still not done, as I want to make photos with gnarly, leafless branches and in all seasons under different weather conditions. I’ve also begun using a Polaroid SX70 with Time Zero film.

In many of the photographs I merged an epitaph with a symbol. Symbolic carvings on stones reveal spiritual concepts such as eternity, mortality, sanctity, peace, redemption, etc. The words of old epitaphs have evolved like gossip does, but the meaning is the same. As far as I know, there is not an author that can be tracked down for the ones I used.

The following epitaph is used with the photograph Urn as if it speaks to remind us of our mortality: 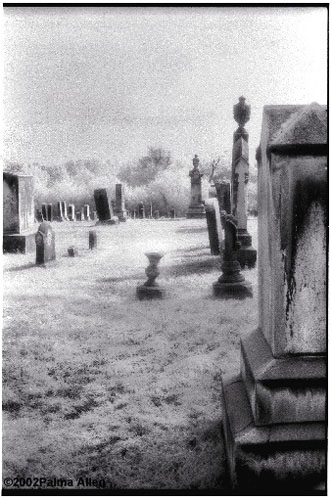 And share with me the raptures of the skies.

Our bliss divine to mortals is unknown;

Immortal life & glory are our own.

There too may the dear pledges of our love

Arrive, & taste with us the Joys above.

For infrared film I bracket, but the exposure that renders the best image is usually underexposed about 2 stops with an 87A dark red filter. I use Kodak IE at around 200 ASA (ISO) for grain. Using infrared film is fun once you gain experience it and can “see” with it. Be sure to have a changing bag to turn over film in daylight. Because I use mostly slide film for my business, I do not have the time for a darkroom. I did learn photography in a darkroom but I do not develop my film now. I have an assistant for this purpose only, who specializes in developing black and white and infrared film. He is very detail oriented and consistent which is very important for tracking work correctly.

I scan the negatives and manage images digitally. The images are as they are on the negative, minus a power line in one of them. I do not do anything one couldn’t do in a darkroom. I print them on matte paper with a dark cyan or sepia tone.

These images are not about witches and ghosts, morbidity or darkness.
It’s about discovering peace through a creative process. Anyone can go into a cemetery without being bothered. Where I live massive urbanization is everywhere but step inside a graveyard and it is dead quiet.
It’s also about reliving the past and appreciating contributions our ancestors have made; Veteran’s, teachers, parents, religious leaders, lovers. Each cemetery is a gallery of art and history carved into headstones of slate, marble and granite. Epitaphs and symbols express traditions, values and opinions of the deceased and their loved ones. We all will go someday. Visiting cemeteries is becoming familiar with a place that you’ll know you will eventually come back to.

Palma Allen is originally from Finger Lakes area of NY but currently lives near Washington DC. She is a self-taught photographer with a background in music and art.

How to make a paper negative from a photograph