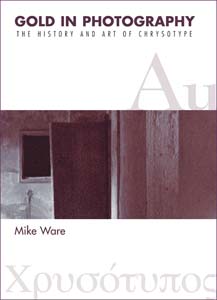 $65   for paperback including shipping – or buy both Gold in Photography and The Chrysotype Manual together for $105.

An indispensable insight into early photography, metallurgy, alchemy and science. The first published history of the use of nanoparticle gold in the arts, detailing the discoveries by Elizabeth Fulhame, Count Rumford and Michael Faraday that paved the way for the invention of photography. 48 page colour section with early chrysotypes by Sir John Herschel and new chrysotypes by six contemporary artists.

Reviews of Gold in Photography:

“These books are fascinating to read…”

“…of all the alternative process instruction manuals I have ever read, this one is easily the clearest, most comprehensive, and best written.”

“There is so much more in the books than what is found online. Well worth the investment!”

The Chrysotype Manual: The Science and Practice of Photographic Printing in Gold

The world of lith printing