A multi-step processes designed to push color film to create Pointillist effects with intense grain as well as many unpredictable and extraordinary outcomes.

Essentially, it can appear as very intense cross processing with local solarized elements.
Initially, I learned of this method in the 90’s from seeing the amazing work of committed ‘accelerators’ in a communal lab.
They generously shared with me the how-to article from the now defunct magazine Darkroom Photography.  The issue was from May 1989 written by Rand Molinar, titled “Film Acceleration”. If you goggle these words, there are a number of sites that will explain and guide you as well. Also, Robert Hirsch describes it in the second edition of Color Photography.
These various recipes can be quite detailed and rigid. My method is quite fast and loose as I enjoy being surprised at the end. Basically, you’re reversing slide film into a color print negative with a bleaching step in the middle.
Necessary is the C-41 process, this being how color print film is developed. The chemistry can be found online and it’s a relatively simple procedure and better still, the same for all color films! There are also YouTube tutorials. HOWEVER,  It is quite toxic and must be handled carefully with a respirator and gloves!
It is crucial to dispose of it, as many photo chemicals require, as toxic waste with your municipality.
DO NOT EVER THROW IT DOWN THE DRAIN UNDER ANY CIRCUMSTANCES!
If you’re not interested in this D.Y.I. extra step, there may be labs that will process it for you although this could be quite a challenge. At the point the film is ready for this step it has been bleached, looks weird and scary to those unfamiliar with unconventional processes, such as a commercial lab.
I have been reassured by those brave enough to cooperate that it can be handled as a simple cross process (slide to negative).
Here is my first accelerated image, in which I followed the directions loyally: 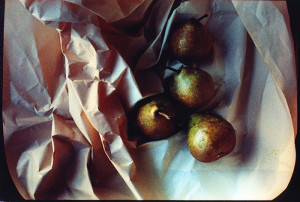 Below are the later variations in which I used other black and white film developers instead of Acufine. I have found that this process is forgiving, predictable and less ‘alternative’ if the procedure is followed to the letter, yet when I began to get eccentric deviations, I often wasn’t able to exactly reproduce those results.
I believe this is due to the following variables: the film I use is always quite expired (as in decades) and the conditions I shoot and store it in are not consistent, temperature-wise,
I often use metal pinhole cameras, subject to temperature shifts and light leaks.
I also do not keep detailed track of exact development temperatures and times.
Consequently, I encourage you to try the straight method 1st,  then tweak it and, unlike me, keep track of the details. 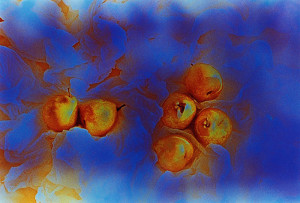 I have more of my imagery on my Alternative Photography gallery page. 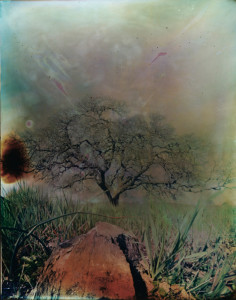 Start with 750 ml of water at 75 With constant stirring,  add the following:

If you’re doing this all at home, it takes about 1-½ hours for the entire process.

Shooting a pinhole “movie” with a matchbox camera