The ferric gum process is like gum bichromate in some respects but it is also radically different. Sensitiser is brushed onto the paper, the paper is dried and exposed under a suitable image, and only at this point would pigmented gum be brushed onto the exposed paper. 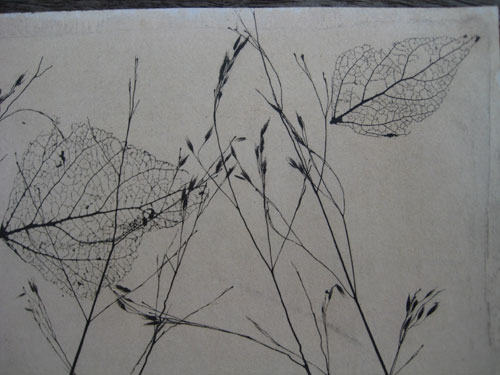 The ferric gum process is an unusual process for making photographic prints.  It could easily have been invented in the 19th century because everything required was available at the time.  However as far as I’m aware the process wasn’t invented until the 1970’s.  You could say that it is a process invented after its time!

Image above: Detail from a photogram made with skeleton leaves.

The process is like gum bichromate in some respects but it is also radically different.  So let me give you an overview by comparing and contrasting the two processes.

In gum bichromate the sensitiser is first mixed with pigmented gum arabic.  Then the mixture is brushed onto a paper support and dried.  The coated paper is exposed under a suitable negative and finally the print is floated in water to wash away any gum that was not hardened during the exposure.  It is important to note that the hardening begins at the surface of the gum and continues down towards the paper.  Consequently much of the hardened gum is detached from the paper until the print is finally dried out.  This is why a lot of fine detail is lost and indirectly why the prints are tonally flat unless the process is repeated two or three times on the same print.

Now imagine that gum bichromate could be done differently.

Imagine the sensitiser being brushed onto the paper without any gum.  Then the paper would be dried and exposed under a suitable negative, rather like making a cyanotype. Only at this point would pigmented gum be brushed onto the exposed paper.  The sensitiser would rise up through the gum, hardening it as it went.  Finally any soft gum would be washed away.  If the process could be done like this it would be very different.  Most importantly the gum would be hardened from the paper upwards.  The fine details would be retained and a wide tonal range could be achieved in a single stage, provided the gum layer was thick enough.

Okay, so one cannot actually do gum bichromate this way!  However the process that I have just described is not a fantasy.  It is pretty much how the process dealt with in this article works.  The only difference is that ferric chloride is used as a sensitiser and a positive image is required instead of a negative one.

I can imagine skeptics thinking that this new process is impossible.  Firstly, they might point out that ferric chloride is not light-sensitive.  True, it isn’t on its own but it is in a suitable organic medium; it changes from bright yellow to the white ferrous salt.  Back in 1970 any decent paper provided a suitable medium but unfortunately today’s acid-free papers are problematic in this respect.  Secondly, skeptics might argue that the fine details and even the whole image would be swept sideways as the pigmented gum was brushed across the exposed print.  I thought this myself until I discovered otherwise.  Surprisingly the image is both detailed and sharp and the gum layer can be very thick, allowing the print to have a good tonal range. 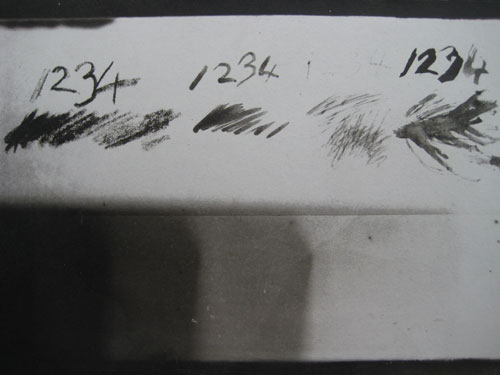 Sample showing the tones and textural details possible with the process

So this seems like a perfect process; better than gum bichromate and much simpler than making Carbon Prints!  Unfortunately there is a fly in the ointment.  It is difficult to clear the excess iron compounds from the finished print and over time these result in a rusty appearance.  I was unable to solve this problem in the 70’s and 80’s.  But my knowledge of chemistry is patchy and it was difficult for me to find things out then; the web didn’t exist!  I did develop the process in various ways, including making a version with shorter exposure times and negative images instead of positive ones, but no version worked perfectly.

If you are not put of by this imperfection and even better if you see it as a challenging problem to be solved then read on!

If I were writing in the 1970’s I would have given you a recipe at this point.  Then you would be able to make the process work first time.  However that’s no good now because paper has changed so much.  Instead I will describe three separate experiments and if you can make them work you will have no problem with the whole process; indeed you will have a better understanding than following a recipe would allow.

2Find some suitable paper* and make marks on it with ferric chloride solution.  You can dilute the ferric chloride solution to three times its volume or more if you like and it would be a good idea to give your marks some fine detail and tonal variation.  Dry the paper (a fan heater is good for this).  Now use a soft brush to mop pigmented gum arabic across the paper.  Finally wash the paper in cold water.  This will convince you that ferric chloride can rise up from the paper and harden the gum flowing over it.  You will also see that fine details are retained and a good tonal range is possible.

3Find some suitable paper* and brush some diluted ferric chloride solution over it and dry it.  Shade some areas of the paper and expose it to strong light.  The bright yellow ferric chloride will turn pale and eventually white.  This will convince you that ferric chloride is light-sensitive in a suitable medium, whatever the books say!

The problem with the second two experiments is to find a suitable paper.  Ferric chloride only exists in a somewhat acidic condition.  If it is brushed onto today’s acid-free papers it will turn brown, which means it has changed to ferric hydroxide.  The ferric chloride must remain yellow on the paper.  I am not certain how to solve this problem.  You could try Buxton Paper, which is designed to work with iron salts.  Alternatively you could try soaking ordinary paper in a weak solution of acid to remove all the buffer from it.  If nothing else works you could coat some glass with a thin layer of gelatine and make it insoluble using dichromate.  You might need to add hydrochloric acid to the ferric chloride to ensure that it remains yellow.  This won’t give excellent results but I know from experience that it works.

I ceased working on this process a long time ago and I don’t intend to work on it again; my motivations have changed.  But I would be happy for  people to use it and even happier if they could develop it further.  If anyone is interested I could write another article to describe why the process works, or rather my best guesses about this.  I could also describe how I tried to develop the process further.  If you would like to know more about the process please don’t hesitate to ask.

A description of the process and its variations was published by The Royal Photograhic Society in The Photographic Journal – February 1983. The article was called My way with gum.

This article was written by Michael Andrews who invented the Ferric Gum process in the 70’s whilst trying to use photograghic methods as a way for artists to make prints, simply as an alternative to etching or lithography.