Jim scours the second hand shops finds a contact frame. He decides to build his own – and shows you how you can do it too.

I started off my contact printing using an old picture frame bought from a charity shop (yes I do go into them) it’s got sort of swiveling bits on it that lock the back in place and was ideal for the use I was going to put it to. Alas it was not very well made and has begun to come apart at the corners so I thought I must make another one.

I’d got used to the size of the picture frame 14″ x 10″ and so decided to make the new one the same size.

Jim: I’m no cabinetmaker let alone a joiner and I’ve only got the basic tools everyone else has got, a saw, a mitre block, a hand drill, and some sandpaper.

Most things I make are on a suck it and see basis so I thought I would go to a timber shop and look to see what they’d got, I came out with two 8ft lengths of Pine, one 1/2″ square and one 1/2″x 7/8″. I checked several lengths for straightness before making my final choice. 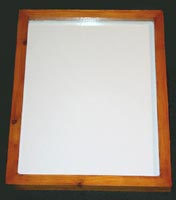 That done I started on the 1/2″x 7/8″ and made the first 45 deg cut at one end using the mitre block. Then measured the 14″ and made the second cut. I then used the first length to measure the second one, so that they would be (almost) the same and then did the same with 10″ lengths. All I am doing here is making a picture frame with mitred corners.

I do have a frame makers corner clamp tool, nothing fancy just four plastic corners and a piece of string to hold the frame in tension while the glue dries. If you cannot make a frame with mitred corners, join the ends at right angles with wood glue, making sure they are square. If you have say a 3/16″ drill buy some 3/16″ diameter wooden dowelling and drill through the joints and then glue the dowels in to make the joints really secure. 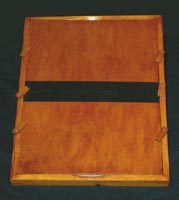 Having left that to dry for a day I made what was another frame on top of the first so that the outer edges were flush, this gives a rebate for the glass. When that one was dry I cut out the two scallops at each end, these enable the user to get a finger in to lift off the back. I then glued the two together and held them down with some bricks until set.

Next came the glass and I took the frame to a glaziers and asked for a piece to fit inside, after I’d explained what it was for the chap suggested 3/16 glass which I accepted and bought. I could have asked him to take off the edges but I didn’t want the glass marked in any way. When I got back home I used some wet and dry paper with the glass in a bowl of washing up liquid and carefully took the sharp edges off. 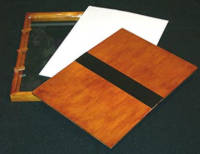 The back came next, for this I used modelers plywood, it’s 5 ply thick, very flat and beautiful to cut, I cut it to fit into the back in one piece. Next came the varnish, I’ve always been a fan of shellac because the first coat sinks into the wood and the next coat dissolves into the previous one.

Having got a nice gloss on all of it except the inside of the back, just one coat here, I cut the back in half and holding it together put some gaffer tape along the cut. I could have used a hinge but as I said I’m not a joiner and getting a hinge in the right position so that the back will open exactly parallel was bound to go wrong.

Putting the sandwich together revealed that the back was still below the level of the frame, I thought it might be, so, down to the fabric shop to buy some felt, I got two off cuts very cheaply. These were cut and glued to the back with carpet glue. 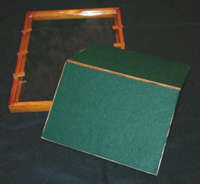 With this in place and a sheet of watercolour paper the same size as the back, the negative and the sensitized paper made the back just proud of the frame. I cut 6 small pieces of thin hardwood to screw on to the frame which would turn to hold the back in place. The older frames had two springs to hold the two halves of the back in place that swiveled into cutouts in the frame, completely beyond my meagre skills I’m afraid. It did mean that these frames could be laid on their backs for use under an enlarger, though, four small blocks glued on at each corner would overcome this easily and make the frame easy to pick up.

One of the advantages of making your own frame is that modifications can be accomplished without any fear of damaging what would otherwise be a costly item.

Jim: Adding up the bits I bought from various sources I think my frame cost about £12.00.

I’ve used it now for about two weeks and though the prints are certainly no better than those from the old picture frame, it is a lot easier to use and holds the negative/print much more firmly.

Being able to make your own equipment is one of the truly good things about alternative photography, even if you don’t make a very good job of it the first time the cost is negligible, you’ll have learnt a lot and the next one will be OK.

Jim is a UK based photographer.