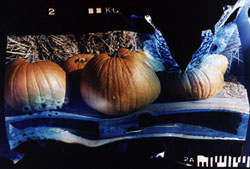 Negatives, being plastic, melt and stretch and scratch very nicely. Practice the technique on some throwaway negatives first before you chance your good ones. You could start with a strip of 35mm negatives. Heat it over an open flame (carefully) or the stove, keeping the strip far enough away from the heat source to prevent burning and bubbling of the plastic – not that this would be a bad thing in some cases! While the strip is heating, you can pull on each end with pliers to stretch it. The final product will warp and may need to be printed in a glass negative carrier, or, at least, with a smaller aperture for greater depth of field. 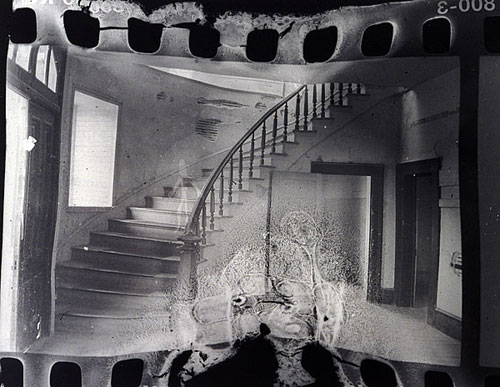 Use the tiniest scratching tool possible for 35mm negatives, because with enlargement, the scratches will be huge and dominate your image. A quilting "between" needle embedded in a pencil eraser might do the trick. They are smaller, stubbier, needles and thus are less bendable. Watch your scratching process so you make smooth, fine marks, or the lines will appear jagged and distracting. When you scratch on the top/non-emulsion side of the negative, refraction will produce white lines on your print. When you scratch on the bottom/emulsion side of the negative, the scratches will remove emulsion and produce black lines in the print. If you are using a color negative, the scratches will produce black and whitish lines and also different colors. These are general rules of thumb, anyway.

Scratch words into the top of the negative. Write with a pencil on top of the image, and the graphite will act as density and print lighter. Scratch an empty space in one negative and sandwich another negative with it when printing, so the second negative will print through the cleared area. Scratch and burn at the same time, manipulating the plastic while it is warm. 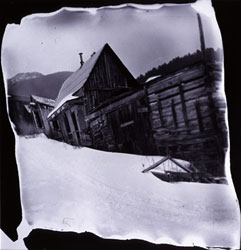 There are other ways of wreaking havoc with a negative. For instance, if you are using Polaroid Type 55 P/N that needs clearing in sodium sulfite solution after development, you can delay clearing or never clear the negative. The chemicals left on the negative will eat the emulsion a bit and bond to it. If you leave it in the sun and let the sun heat it up with the chemicals on it, this aging process will hasten.

James Fee distresses his P/N negatives this way by leaving them in the sun for 2 weeks to 2 months or longer! More obvious ways of distressing a negative are to step on it, squish it around in the dirt, carry it around in your backpack for a while to get creases in it, take a piece of sandpaper to it… just think, now instead of worrying about keeping your negative scratch free and dust free, you have permission to screw it up!

You can eat away parts of the emulsion chemically. The best way to do this is with potassium ferricyanide – photographic bleach. The easiest way is to mix up a little bit of it into a little bit of water until it resembles Mountain Dew (a lemon yellow) and use that. The bleachremoves silver, and requires fixing afterwards, so rinse the negative in water until the yellow stain disappears, and then fix in film strength fixer for 2-4 minutes. If you accidentally overbleached, you can redevelop the negative before fixing. In fact, you can bleach and redevelop the negative multiple times to mess with its contrast and grain.The more you bleach and redevelop, the grainier and higher contrast it becomes.

Use Dektol for your developer. Once you have bleached one negative, your mind will start working on the possibilities. If you think this is silly, think again: at a prestigious gallery this summer I saw a large image in the multi-thousands of dollars treated just this way. So splatter and drip and scratch away. You can also cut a stencil design, and lay it over the negative when bleaching to bleach a particular pattern.

Learn about a variety of alternative photographic processes.
A technical book highly recommended both for beginners and pros.

Learn about a variety of alternative photographic processes. A technical book highly recommended both for beginners and pros.

A step-by-step description of the gum printing process and showcases of artists’ works ranging from monochrome to colorful and from subtle to bold.

The history and the process: from beginner to intermediate level, with step-by-step instructions and troubleshooting.

Cyanotype: The Blueprint in Contemporary Practice

Digital Negatives with QuadToneRIP: Demystifying QTR for Photographers and Printmakers

Fully explores how the QuadToneRIP printer driver can be used to make expert digital negatives.

A rose by any other name…