Brian Young shows us how to measure our exposure times for our pinhole cameras a little more precisely than “bright sun” or “hazy sun”.

The purpose of this short article is to encourage pinholers to adopt an objective means of determining the long exposures required for pinhole cameras. The subjective “bright sun, hazy sun” approach is all very well but it lacks rigor.
The method is based on extrapolation of the familiar EV Chart (see below). Imagine this chart being extended downwards for ever-increasing f-numbers and to the left for ever-increasing exposure times until we are in a region of interest to pinholers. 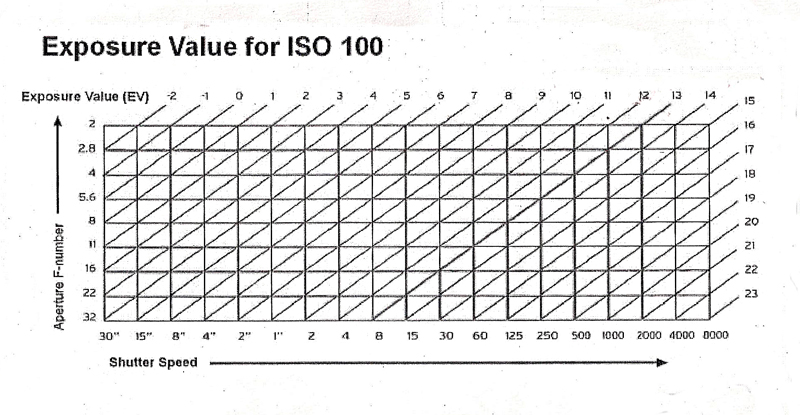 The EV Chart was conceived for use with lensed cameras which may be set to a variety of f-numbers. With a pinhole camera, the f-number is fixed and this introduces a major simplification which makes the task of extrapolation much easier. Instead of a 2-dimensional EV Chart for a particular film sensitivity, we have 1-dimensional EV Line.
Extrapolation works for any negative as long as reciprocity holds. Fortunately, in the author’s experience, film or paper sensitivities of ISO 25 or less do not appear to exhibit reciprocity failure, even for exposures of several minutes.

An Exposure Table will be found at the end of this article. Here there are exposures (in seconds) for a typical paper negative with a sensitivity of ISO 12.5. Across the top of the table are a range of f-numbers (N) in half-stop intervals from 45 to 1024. Down the left-hand side are exposure values (EV) from 7 to 16 in steps of 0.5. You are free to interpolate if your f-number doesn’t happen to be one of those shown.

Thanks to the assumption of reciprocity, the table can be used for other film or paper sensitivities. For example, some papers have a sensitivity around ISO 6 (one stop down from 12.5) so you will double the time shown. My favourite 4in x 5in cut film has an ISO of 25 (one stop up from 12.5) so I will halve the time. If you use ISO 100, then divide the time shown on the table by eight.

If you have a light meter, well and good, since they measure EV directly. Just make sure that you set the film speed to 100 ASA or ISO. You can often find good light meters in flea markets; don’t buy a Russian one since they use the GOST standard.

A conventional camera may also be used as a light meter. Set the ISO to 100 and read off the aperture and shutter-speed readings. Then enter the EV Chart for ISO 100 (above) to find EV for the scene.

Set your camera to show half-stops in aperture and/or shutter speed and you will end up with half-stops for EV, which is fine. Some cameras offer an option of one- or two-thirds stop intervals which should be declined.

I do hope that you find the EV approach to exposure useful and rewarding. Happy pinholing!

Formerly an academic engineer and originally from London, Brian now lives in Berlin where he practices, researches and writes about alternative processes, pinholing and traditional film photography.