A brief history of the cyanotype process – John Herschel’s invention.


The cyanotype process, also known as the blueprint process, was first introduced by John Herschel (1792 – 1871) in 1842. Sir John was an astronomer, trying to find a way of copying his notes.

Herschel managed to fix pictures using hyposulphite of soda as early as 1839. In the early days the paper was coated with iron salts and then used in contact printing. The paper was then washed in water and resulted in a white image on a deep blue background. (Apart from the cyanotype process, Herschel also gave us the words photography, negative, positive and snapshot.)

One of the first people to put the cyanotype process to use was Anna Atkins (1799-1871), who in October 1843 became the first person to produce and photographically illustrated a book using cyanotypes. The cyanotype to the right is from a book of ferns published in 1843 by Atkins. She was a pioneering figure in photographic history, having produced the first book to use photographic illustrations. She was a botanist and her father a friend of Fox Talbot. Atkins book uses 424 cyanotypes (or as they were known then: “shadowgraphs”). The book was called “British Algae: Cyanotype impressions”. It was printed privately and issued in several parts over ten years.
Her book therefore precedes Fox Talbot’s own “Pencil of Nature” in 1844. 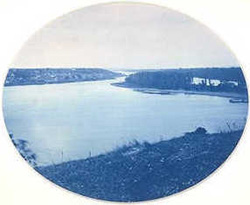 Another, relatively unknown early cyanotype artist was Henry Bosse. His image Mouth of the St. Croix River from the series Upper Mississippi River was printed in 1885. It is held in the National Museum of American Art a Smithsonian Institution.

The process became popular with pictorialists, for whom a commercial paper called ferro-prussiate was marketed. The process was also used extensively for copying architectural plans until it was recently made obsolete by photocopying and computer printers.

The cyanotype process has remained virtually unchanged since its invention but a few variations have been developed, one of which is the New Cyanotype II by Mike Ware.

Spike MacGee is a freelancy copywriter and journalist with a strong interest in the alternative processes.