Hervé Sachy has been working with Copper photogravure etchings for over 40 years, but was, due to the ban of dichromate forced to find a new way to do etchings. This resulted in a chrome free copper photogravure process – better for both the artist and the environment.

Hervé Sachy, who has lived in the South of France for the last 40 years, learned traditional etching techniques as a student in Paris. During all those years of etching, Hervé’s developed a passion for working with metal and specifically copper. Hervé also soon found the symbiosis between etching and photography. After various attempts, he finally realized that photography had started with gravure printing.

As an autodidact, Hervé Sachy learned the copper photogravure technique of the 19th century, and after a few years of works, he managed to master the technique.

In 2017 it became virtually impossible to find dichromate – the essential chemical compound the copper photogravure process – in Europe.

“This ban is in my opinion completely legitimate when we know the toxicity of these chromates for human and animal health and also for our planet.”

The ban of dichromate in Europe was the motivation for Hervé to search for a new copperplate photogravure process, one that is more ecological and less toxic. Hervé Sachy receives artists in his studio and believes it is important to teach students how to work with legal and environmentally friendly products.

1. Gelatin paper sensitization as in the classic copper photogravure process

As in the classical process, we must sensitize a gelatined paper or carbon tissue with an aqueous solution of this product DAS (diazidostilbene), here at 3%. It is not easily soluble in water.

After drying the DAS-sensitized gelatin paper, a digital positive film and the sensitized paper are exposed to UV rays for a very precise time of a few minutes (specific to each exposure system): the exposed parts (the light areas of the film) will become insoluble in hot water as opposed to the dark areas which will dissolve in hot water during the following development.

3. Hydration & adhesion on the copperplate

After exposure, the paper is rehydrated in a mixture (water+alcohol) at low temperature and plated on a clean degreased copperplate and the adhesion is maintained for about 15 minutes.

The development consists of melting in hot water (about 50°C) the insolated parts which have received the least light, the dark areas. The bright parts of the image have received more UV and do not melt or little with the warm water: they will give the bright areas of the image. This operation will take a few minutes, depending on the tonality of the image.

I usually let this stabilize overnight before proceeding to the final engraving, but it can also be done after 5 or 6 hours spent in front of a fan. Here are some photographs of these gelatinized plates ready to be engraved with iron perchloride baths or to receive an aquatint if it has not been done on the plate before the process. 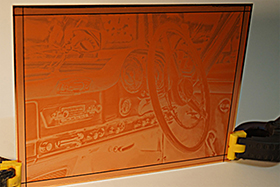 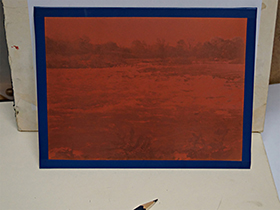 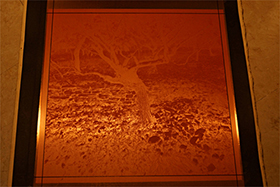 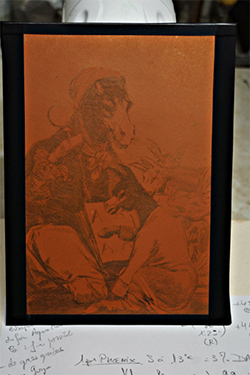 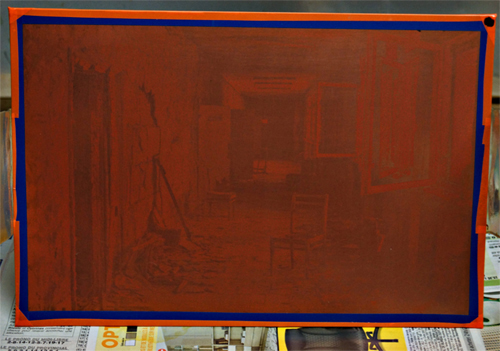 6. Aquatinting or aquatint on copperplate

The realization of aquatint is necessary in photogravure to create a pattern engraved in copper which will later, at the time of printing on paper, will retain the printing ink. This pattern can be realized at two distinct moments of the process: either at the beginning on the naked copperplate or at the end using the gelatin developed on the copperplate. The 2 methods work well and they also each have their advantages and disadvantages. In addition, one can choose either rosin or bitumen. A grain box is needed to apply a bitumen or rosin powder either on the copper at the beginning or on the gelatine layer at the end. In both cases, the powder must be fixed by heating it until it melts.

Here is a typical installation to practice the final etching: several trays to receive the different iron chloride baths at various concentrations and the last bath to remove the gelatin at the end with hot water. First, the blacks of the image are etched, then the dark grays, then the medium grays to finish with the last lightest grays. This is an operation that lasts between 20 and 30 minutes on average. With the DAS, the action of light on the gelatin is less powerful and we will notice it quickly. With this product, the etching phase is faster. 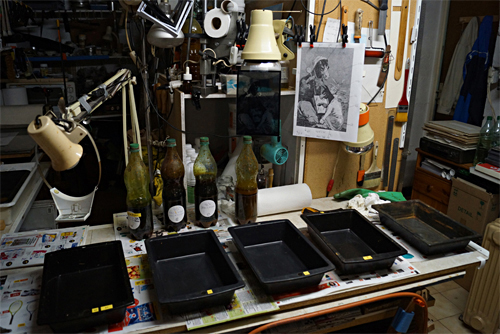 The engraving starts faster than with dichromates, almost immediately and it takes a bit of practice for the first times.

A few steps of an DAS etching based on an old gravure by Goya: 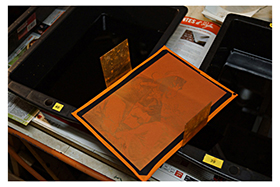 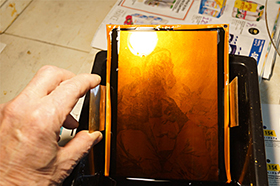 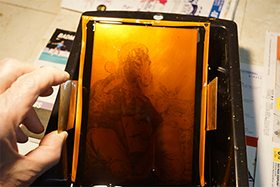 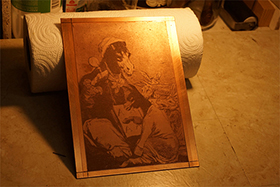 It is obviously necessary to have access to an intaglio press or better to own one, here is the one in Hervé Sachy’s studio:

Many papers are suitable for photogravure, the main thing is to know them well and to plan a preliminary soaking so that it goes to seek the ink at the bottom of the engraved plate.

I use traditional oily inks in intaglio printing, the same as those used in conventional printmaking.

Some prints of plates etched with this new DAS process: 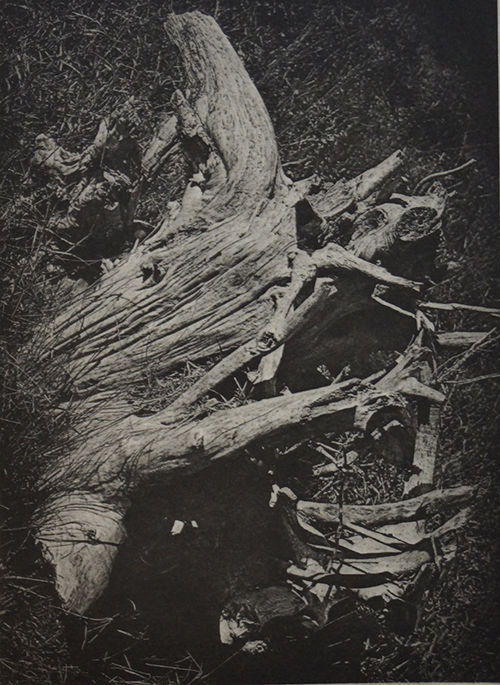 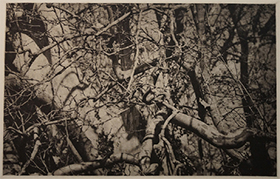 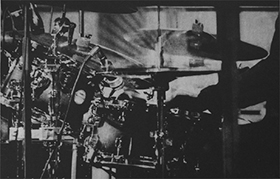 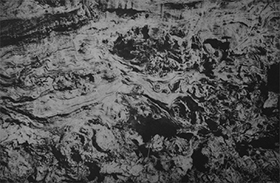 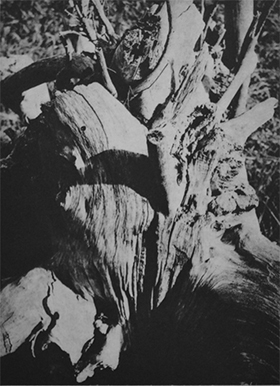 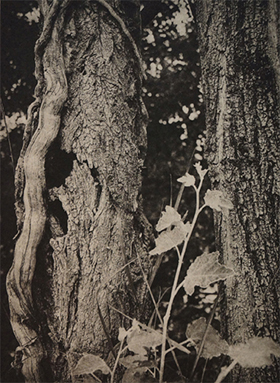 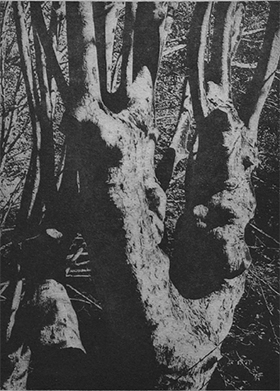 Making a cyanotype quilt – from the garden