An excerpt from The Carbon Print explaining the basic steps to transform pigmented gelatin into a print in the Carbon print process.

Carbon transfer is a contact printing process that produces an image formed by a layer of hardened, pigmented gelatin on a surface which is usually paper. The surface on which the image is printed is generically referred to as the “support” because carbon images can be printed on a variety of surfaces such as glass, metal, and synthetic paper sheets, in addition to a variety of types of natural paper.

The process has traditionally gone by the name “carbon” because the original and most common pigment was carbon black which is man-ufactured from carbon soot. However, in practice, a wide variety of pigments are used. Accordingly, the process could be more accurately referred to as “pigment transfer.” The term “transfer” refers to the transfer of the pigmented gelatin from a temporary support to another support surface on which the image is developed. The transfer pro-cedure was patented by Swan in 1864 and was the major innovation that led to carbon printing as we know it today. There are some lesser known direct carbon processes such as Fresson in which no transfer of the pigmented gelatin takes place.

The making of a carbon print begins with a sheet of “carbon tissue.” The tissue is a smooth layer of pigmented gelatin coated and dried on a sheet of flexible material. The use of the term “tissue” is an anachro-nism which probably has its origin in the fact that the paper backing of the material was disposed of, like a tissue, after use.

The carbon tissue is made light-sensitive by coating it with a solution of dichromate which it absorbs. When dry, a negative of the same size as the final print is placed in contact with the sensitized carbon tissue, and exposed with a light source rich in UV light. This causes the gela-tin to harden directly in proportion to negative densities, i.e. the tissue is hardened more in the shadows than in the highlights.

After exposure the tissue is soaked briefly in cool water, then squeegeed into contact with another support, usually paper. The sandwich of tis-sue and support is allowed to rest for about 30 minutes. The sandwich is then transferred to a tray of water at about 104° Fahrenheit (40° Celsius) for development. Once the pigmented gelatin has begun to melt the tissue is peeled from the support and discarded. The unhard-ened gelatin slowly washes away from the support leaving the relief image.

Once the carbon relief is on it’s final support it is allowed to dry, resid-ual dichromate is cleared from the print, and it is ready to be prepared for presentation.

In summary, the major steps in making a carbon print are:

Sandy King is a photo historian and landscape photographer, working with large format cameras. He prints with carbon, kallitype and palladium. John Lockhart has been working in a variety of handmade process for years, and carbon transfer is the current focus of his work. John lives and works in Austin Texas.
You can also download this chapter as a pdf: Carbon print – process overview 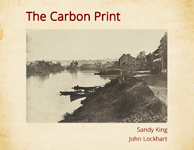 The Carbon Print
by Sandy King and John Lockhart

Together, Sandy King and John Lockhart have produced a single book that covers all aspects of: single and double transfer carbon, materials manufacture, equipment and supplies, digital and analog negatives for carbon printing, color carbon and carbro.

A new version of Sandy King’s book Carbon and carbro.