Nancy Breslin talks about two shows she is having in the month of April, both featuring pinhole photography.

The first one, at the Delaplaine Visual Arts Education Center in Frederick, Maryland, is exclusively pinhole. I have work from five projects: Squaremeals (“a pinhole diary of eating out”), Amenities (hotel diptychs), amusement parks, Galaxies, (a brand new project featuring hugely enlarged images of ceiling lights in restaurants, which because of diffraction end up looking like… galaxies! and coating them with encaustic adds to this effect), and finally a short video that comes from my work as artist-in-residence at Winterthur Museum, Garden & Library. I’ve exhibited some of these projects before, but this is my first opportunity to exhibit different pinhole approaches together. The show closes on April 28, which is Worldwide Pinhole Photography Day this year. 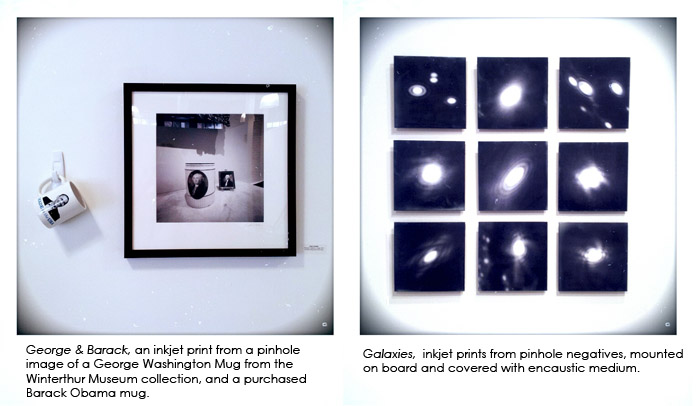 The Winterthur residency leads to my second show, NWAA & Winterthur: A Collaboration, which features work that Carrie Mae Smith and I did during our time as artists-in-residence at Winterthur, which is a large (174 room) former DuPont home which now houses a premiere collection of American decorative arts (furniture, silver, ceramics, etc.). The job Carrie and I had was to be inspired by the museum collection, as well as the gardens and library, and to create artworks in response. Not surprisingly, two of my five projects involved pinhole photography. For one, I photographed antique objects featuring George Washington, such as fabric, a figurine, and a dish, and paired them with similar objects featuring Barack Obama. It was meant to bring to mind how similar George Washington’s day was to our own, in terms of people seeing leaders as heroes and wanting memorabilia related to this. The second pinhole project is the same video being shown at The Delaplaine. The movie contrasts items from antique trade catalogs (some of those held by the Winterthur Library date back to the 1700s) and similar items currently in the collection (which I photographed with my Zero 2000 pinhole camera).

If you are in the area, submit an image to the Pinhole Day gallery.