Anthotypes are a beautiful way to create fine art images right from your garden. This long neglected process, originally invented by Sir William Herschel in 1842, is simple yet elegant. An emulsion is made from crushed flower petals or any other light-sensitive plant, fruit or vegetable. A coated sheet of paper is then dried, exposed to direct full sun-light until the image is bleached out. This is done ideally in a printing frame over 1-3 days or more depending on conditions and negative/material. What you see is what you get. No fixation is required. You can follow the gradually emerging image as you go. Results vary greatly from plant to plant and the strength of the emulsion employed. The resulting images are exquisite and often almost wispy or dream-like.

The Anthotype process is a beautiful way to make images and is certainly the most environmentally-friendly.

The photo-sensitive properties of plants and vegetables have been known to scholars for centuries. Among many early observations the experiments of Henri August Vogel in Paris are of particular interest. He found in 1816:

An alcoholic tincture of either red carnations, violets or corn poppy turned white behind blue glass in a few days, while it remained unchanged behind red glass after about the same time. Cotton and paper coloured with these tinctures showed the same differences. 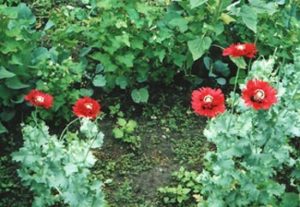 When Herschel later that century attempted to invent a colour process he tried several flower and plant emulsions and published his findings. His research resulted in what we now refer to as the Anthotype process. It should be pointed out that his research into making photographic images from flowers was limited and was ultimately abandoned since no commercial application was feasible from a process which takes days to produce an image. The process continued to be listed in photographic the literature of the time but was likely little used.

Over time the process has earned a false reputation for being simply too impractical. Image permanence has been brought into question to this day but this problem seems to be mostly related to choice of flower or plant matter.

I could not phrase it better than Snelling’s description which follows:
“From an examination of the researches of Sir John Herschel on the coloring matter of plants, it will be seen that the action of the sun’s rays is to destroy the colour, effecting a sort of chromatic analysis, in which two distinct elements of color are separated, by destroying the one and leaving the other outstanding. The action is confined within the visible spectrum, and thus a broad distinction is exhibited between the action of the sun’s rays on vegetable juices and on argentine compounds, the latter being most sensibly affected by the invisible rays beyond the violet.
It may also be observed, that the rays effective in destroying a given tint, are in a great many cases, those whose union produces a color complementary to the tint destroyed, or, at least, one belonging to that class of colors to which such complementary tint may be preferred. For instance, yellows tending towards orange are destroyed with more energy by the blue rays; blues by the red, orange and yellow rays; purples and pinks by yellow and green rays.”

1Start with any flower you like although the following seems to work well: Poppies (images below were made with the red poppies above) or Peonies (Clive Heritage-Tilley). According to Henry S. Snelling the leaves of the laurel, common cabbage, and the grasses, are found sufficiently sensitive. I have also tried Goldenseal and Echinacea but the results were not encouraging.
The most important thing to remember is that many, many species of flowers have never been explored. Crush the petals in a pestle and mortar to a fine pulp and add a little distilled water as you go. The purest water you can find is recommended since any impurities will interfere with the delicate light-sensitive properties of the emulsion. Filter the juices through a cheese cloth or clean linen to remove small plant bits and some impurities.

2Using a clean simple brush coat any paper you like (hand-made Paper being an extra nice touch) in nice even strokes vertically and horizontally leaving no pools of emulsion on the surface.

3Dry the paper in the dark over-night or with a hand dryer on low heat. 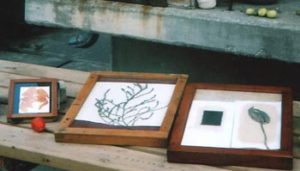 4Contact print any media or plant in a printing frame or clip frame. Expose in full sunlight over 1-3 days or more depending on your aesthetic. Done. The print can be kept in subdued or artificial light although exposure to direct sunlight is discouraged.
A method of fixing Anthotypes is not known and perhaps not necessary despite obvious limitations. 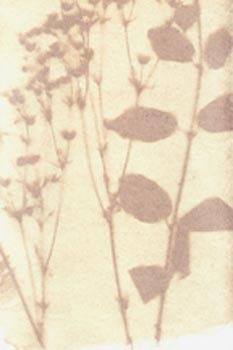 Denatured alcohol or even lighter fluid can be used instead of Distilled and/or de-mineralized water.

Keep the emulsion fairly thick (i.e. less water/alcohol) for darker images or add more distilled water for a lighter image. In the case of red poppies a thicker emulsion yields a light brown image while a thinner emulsion looks more light purple. You can blend your emulsion to get the thickness your prefer as you go along.

Store your emulsion in a dark bottle away from sunlight. It should keep for some time but re-filtration through a sieve is a good idea before coating if the emulsion has not been used. I have used stored older emulsions for months after and it was fine.

The emulsion on paper which is fully exposed to sunlight will slowly fade to near white or faint yellow as its colour is destroyed by the suns rays.

Since exposures must take place in full sunlight the movement of the sun will naturally create a slight shadowing effect unless the whatever media is in very tight contact with the glass.

Will a light-box work? I suppose if the light source is full-spectrum and sufficiently bright, then maybe. However, a popular maxim for alternative photography states; “There’s no substitute for the sun”. This I believe certainly applies here. 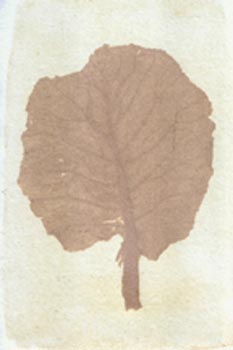 Other things to try out:

Henry H. Snelling writes based on his research: “Viola Odorata – or sweet scented violet, yields to alcohol a rich blue color, which it imparts in high perfection to paper. Senecio Splendens – or double purple groundsel, yields a beautiful color to paper”.

6 thoughts on “The anthotype process”